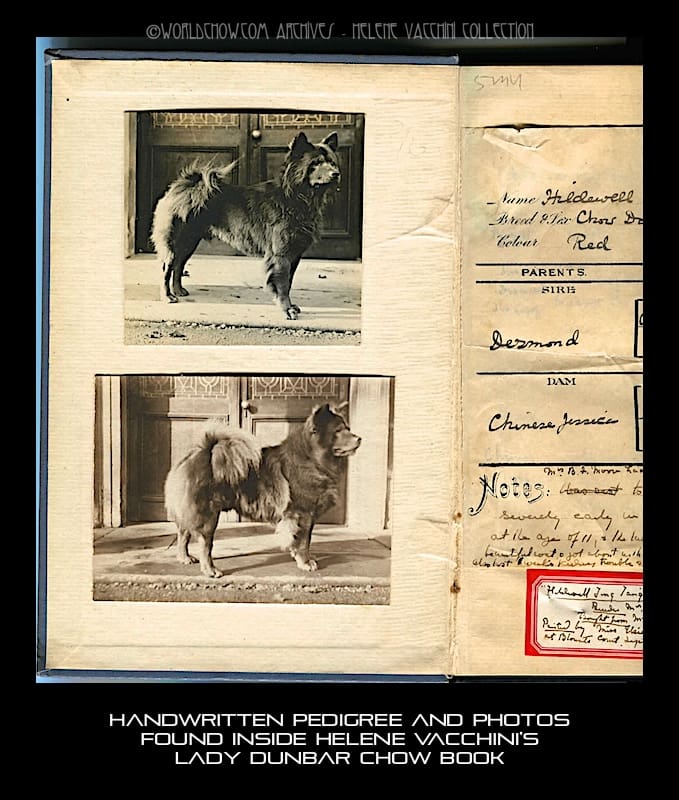 The single most fascinating chow item that shifted my focus in the Worldchow archives from displaying just my own collection on a website… to curating a full fledged archive, was sent to me by a dear friend I met in Italy a few years ago, Helene Vacchini.

In her search for a book to find more info about her rescued chow Shirin, she somehow managed to luck into this treasure trove of very important chow history. Below is her first correspondence with me regarding her find and the quest for more information on this dog “Hildewell Ting Tang” 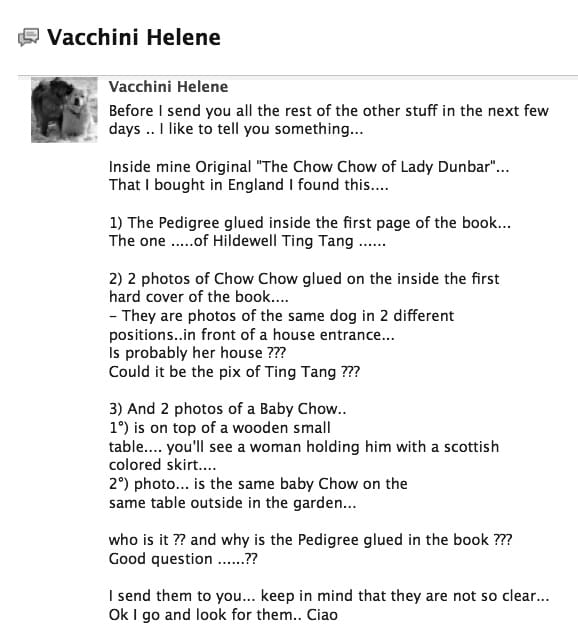 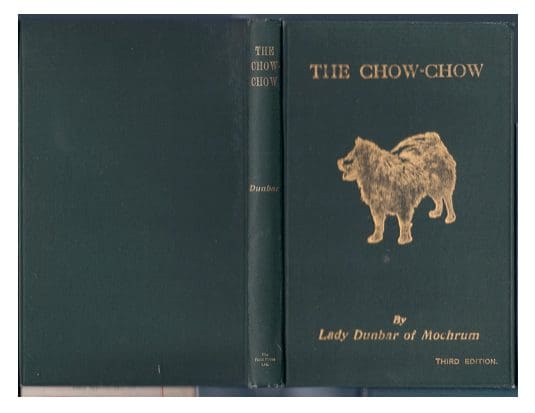 These are OLD photos of what we are pretty sure is the dog in the  pedigree,  HILDEWELL TING TANG Born May 18, 1911 in England. Mrs. Garrett Botfield  herself signed the document and had handwritten notes throughout 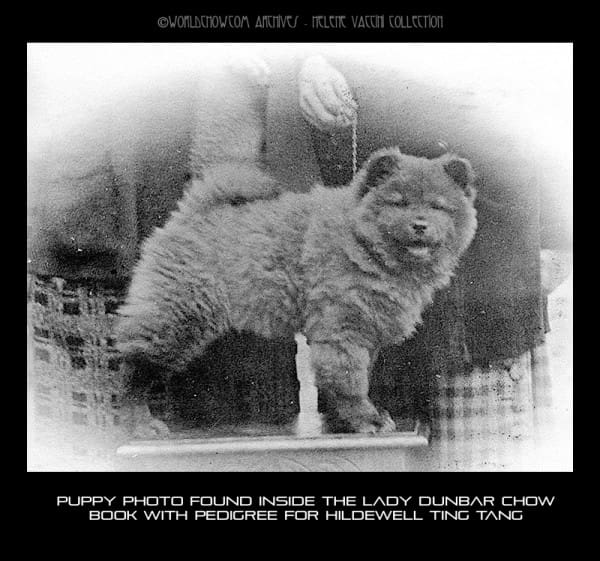 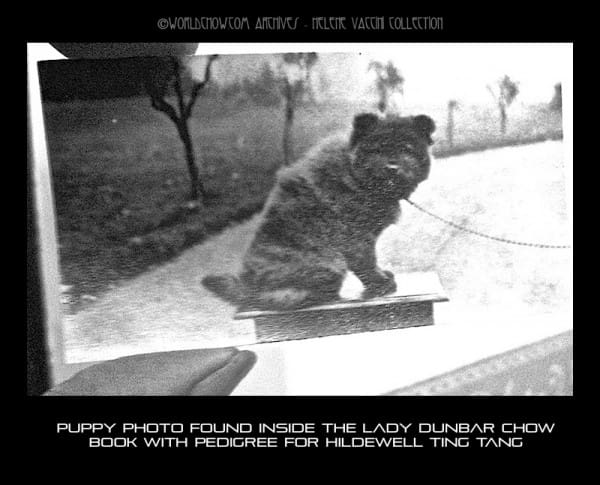 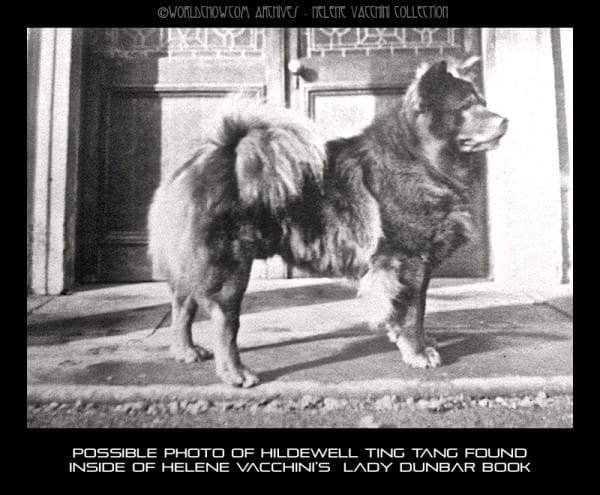 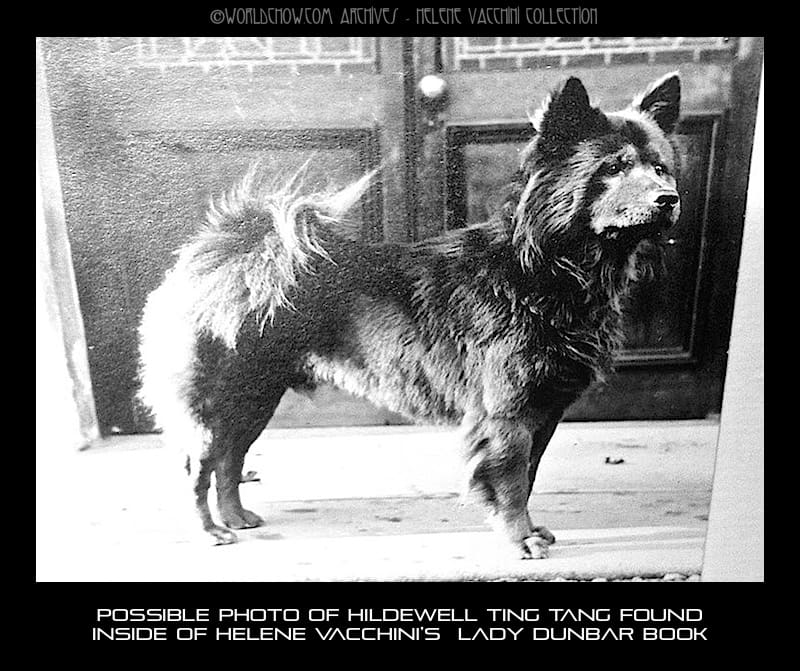 The chows in this pedigree are the WHOS WHO of the top players in the history of our breed.  My goal is to find photos and more information on every dog in this pedigree to fill next to their names below. The breeder Mrs. Garnett–Botfield has always been noted for the largest kennels of the DARKEST RED CHOWS IN ENGLAND and has sent some very fine dogs abroad..(Bluebook of Dogdom 1912)  She was also very involved in a number of garden societies with a fair number of plants I’m finding named by her in the “alpine” varieties. 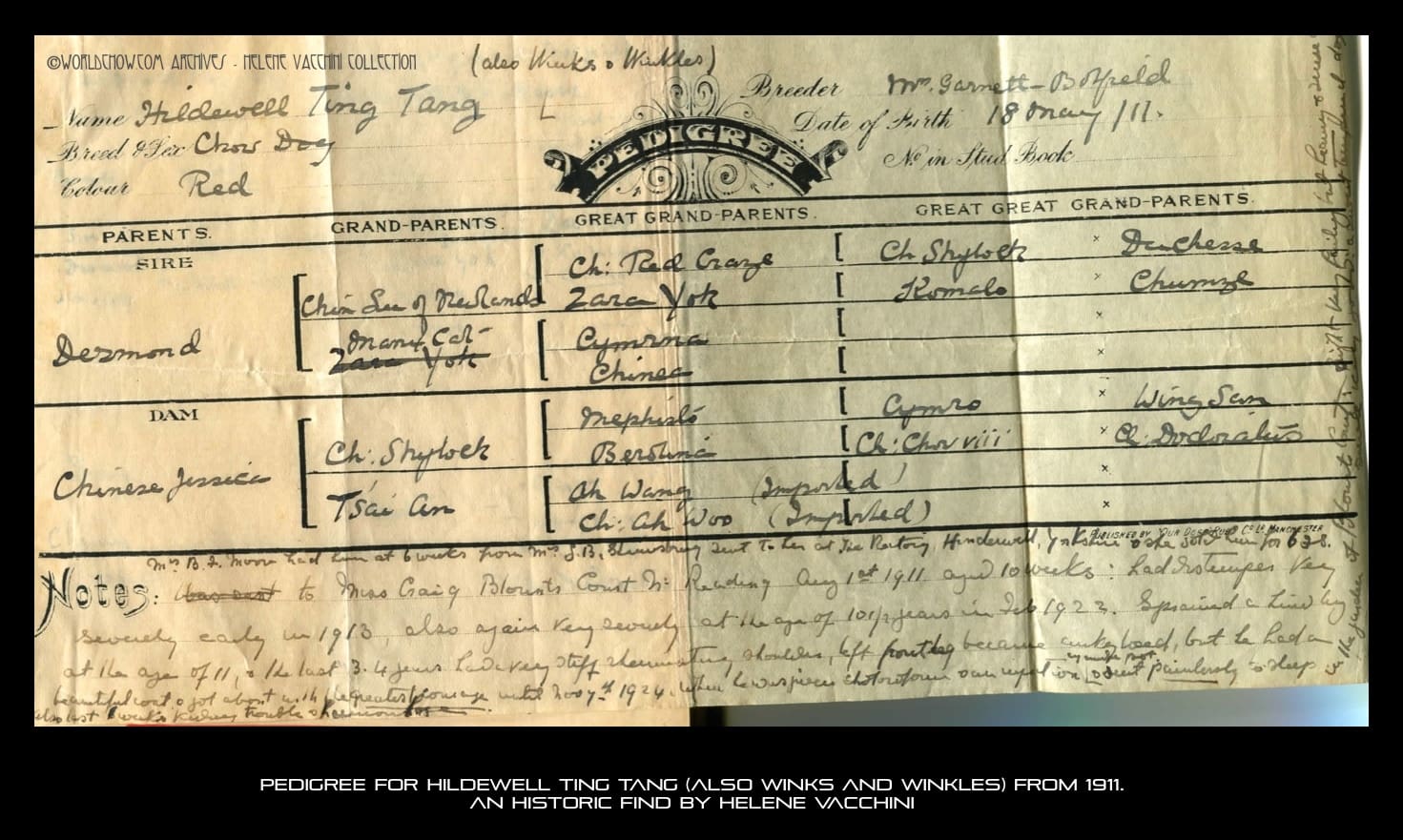 Mrs BF Moore [HILDEWELL CHOWS] had him at 6 weeks from Mrs. LB Bloomsburg ? sent to her at The Rectory Hinderwell Yorkshire and she sold him for 62 £ to Miss Craig Blorents Court No Reading Aug 1st 1911 aged 10 weeks: 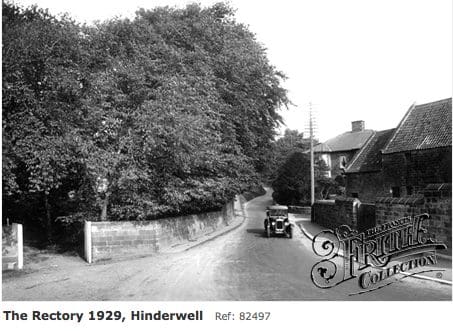 Sprained a hind leg at the age of 11, and the last 3-4 years had a very stiff rheumatus, shoulders, left front leg became , but he had a beautiful coat about with the greatest brown eye until November 7, 1924 when he was given chloroform injection and put painlessly to sleep in the garden of Blounts Court.  Eight very lovely but HEAVY and ???? of ?????.  A very good and sweet tempered dog!!!

MY MESSY NOTES REGARDING THE DOGS IN THIS PEDIGREE ARE BELOW.

SO FAR A FEW NAMES ARE CLICKABLE  TO THEIR OWN PAGE.    I’LL GET THEM ORGANIZED SOON WITH THE PHOTOS I HAVE. PLEASE LET ME KNOW IF YOU HAVE ACCESS TO ANY IMAGES OR INFO ON  DOGS IN THIS PEDIGREE. IT WOULD BE GREATLY APPRECIATED. ~Sandra

Thank you so much Helene for offering to share such a rare and important find with the archive!