You are here: Home / WHY DID CHOWS CHANGE
Click the arrow on the video above to view

WHY DO TODAYS CHOWS LOOK SO DIFFERENT FROM THE ONES IN THIS ARCHIVE?

This is a common question asked while perusing vintage chow memorabilia. In these archives, you will find photos that demonstrate the consistent type and style the Chow Chow was when they were first introduced to America.. Allow me to begin by introducing you to a brief look at the Chows’ ancient and impressive history.  Click button for more in-depth historical details. 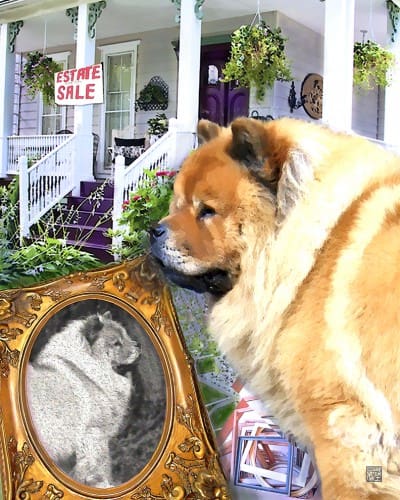 “The Chow Chow, often simply called the Chow, is one of the oldest breeds. His exact history is lost in the China of antiquity. Some historians record that the Tartars invaded China a thousand years before Christ and brought back to the West some middle-sized dogs that looked like “lions” with blue-black tongues.

The Chow as it is known today is easily recognizable in pottery and sculptures of the Chinese Han Dynasty (206 B.C. to 22 A.D.); other artifacts indicate that he was even a much older breed and that he may have come originally from the Arctic Circle, migrating to Mongolia, Siberia, and China.

Some scholars claim that the Chow was the original ancestor of the Samoyed, the Norwegian Elkhound, the Pomeranian, and the Keeshond. In more recent times, that is, in the T’ang Dynasty (7th Century A.D.), it is reported that one Chinese emperor kept something like 2,500 of these “Chow Dogs” as hunting and sporting animals to accompany his ten thousand hunters!

Admired by emperors as well as by Western royalty, used by Chinese peasants for food and clothing,. and adopted as a “favorite” of the movie star set in Hollywood in the 1920’s, the Chow Chow has had a dramatic history. ”  ~from  CCCI WEBSITE

In studying my own archival materials collected over the years, Chow type seemed to remain relatively unchanged from about the 1920’s when the “exotic” breed became very much in vogue and remained a more open-faced and moderate breed until roughly the mid-1940’s.  As experienced in many other breeds., at some point the “bigger is better……..more coat/ exotic colors are more glamorous, ” trends took hold, leading to selective breeding for those traits at the expense of neglecting proper breed type and soundness. A number of the established and experienced breeders were still successful at achieving the delicate balancing act of adding .the “window dressing” if you will, to our sound and sturdy breed without sacrificing proper form and function.

Time warp….. ahead to the 1970’s-80’s ……. The breed goes through a second huge popularity boom.  The more exaggerated “teddybear” puppy spells dollar signs for the pet market breeders.  Soaring sales contribute greatly to the Chow numbers escalating to #6 on the AKC charts.  Inevitably, the mass market breeders discovered the “cash chow” wasn’t turning a profit, as they were not an easy breed to socialize in large numbers or in pet shops, and have relatively small litters ….. with the heavier bone came the risk of expensive C-sections.

The breed count gradually declined with the rewriting of a more concise 1986 BREED STANDARD, focusing on correct breed type and addressing health issues,  but in the wake of this breeding frenzy, Chows were left with new challenges in terms of soundness and genetic problems. Complicating matters, the “square” outline, stilted gait and other hallmarks of chow “breed type” were compromised while the fancy focused on obtaining heavier bone, heads, and coats.

Today, Chows rank at #74 on the AKC 2016 charts,  Despite the fast changes experienced in a short span of time and the challenges the breed faces today, we try to remain encouraged and optimistic, thanks to enthusiasts, breeders and judges who are dedicated to preserving what makes a chow a chow, as well as testing for genetic problems.

Unfortunately, the original chow blueprint is fading fast and has become more difficult to decipher with each passing generation.  I am a huge believer that as breeders,  we have inherited the responsibility and HONOR to be the custodians of our standard…..to preserve chow breed type as it was handed down to us through the early imports into our country.  There is always room in the CHOW STANDARD for interpretation by individual breeders, but the core of TRUE CHOW BREED TYPE and HEALTH should always be considered first and foremost and never compromised.

Let the images within the walls of this virtual archive remind us that the future of the Chow, relies on never forgetting their glorious past.  ~Sandra Miller