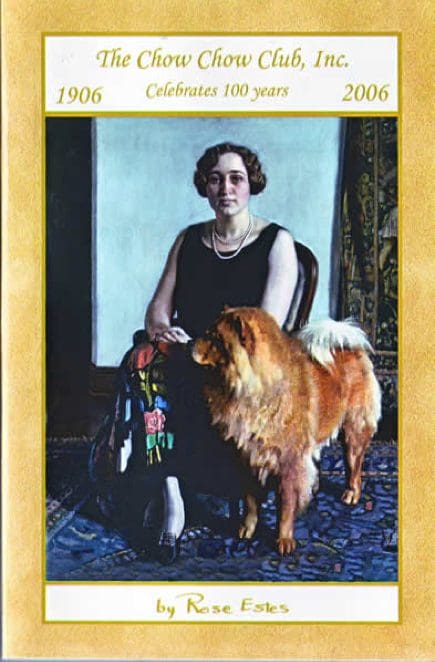 The Chow Chow Club, Inc. Celebrates 100 years by Rose Estes. Celebrating 100 years of the Chow Chow Club Inc’s existence, this book takes a close look at the earliest days of the breed in North America. The lives and contributions of foundation dogs and their breeders are documented and traced, helping provide an intimate portrait of those responsible for developing the ancestors of the 21st century Chow Chow. This book contains 190 pages with over 70 pictures of Chows Chows.  The book can be purchased at Roses website http://thewoofgang.com

ABOUT THE AUTHOR  Rose Estes

SOURCE- below are portions  of an article written Jacques Von Lunen, Special to The Oregonian

Back in 1995, Rose Estes of Waldport , a small village on the Oregon Coast was living her dream: Random House had signed her to a 10-book deal to write fantasy novels, a genre she’d loved since reading about J.R.R. Tolkien’s hobbits. Her books, contributions to successful series such as “Dungeons & Dragons” and “Greyhawk,” sold well.

One day several years ago while browsing an online auction, she found vintage photos that showed Chow Chows and their owners. She couldn’t really afford the purchase, but the seller was willing to arrange a payment plan.

“It turned out these were the people who laid the foundation for the breed in the U.S.” Estes says. She approached the Chow Chow Club, thinking it might want some of the pictures for the club’s 100th anniversary in 2006. The club wanted more: a book on the Chow Chow’s history in America.

Estes had been able to resume writing for herself but hadn’t really thought about doing so for publication. But she already had the photos for the book, and the club gave her access to its records. How hard could it be?   “It went from easy to the most difficult thing I’ve ever done,” Estes says. “There were no records kept by the club prior to 1942.”

Estes went to work unearthing the early days of the breed. And she didn’t approach the book as a breed historian, listing sires and dams, but as a storyteller.   “The history is people, anecdotes about the breeders,” she says. “I had no idea people didn’t write dog books like that.”

She pieced together the early days of Chow Chow breeding from old issues of Dog Lovers magazine and notices in Vanity Fair. She found tales of women seeking liberation in dog breeding — one of the few pastimes deemed suitable for a woman of that era — and of concerns about the breed’s health even then.