ABOVE IS ELVIS’ GIRLFRIEND LINDA THOMPSON WITH HIS PUPPY “GET LOW”

Linda Thompson was born May 23, 1950, in Memphis, Tennessee. Linda won several beauty pageants, including the 1972 Miss Tennessee USA title. In July of that year, she began a relationship with the recently separated Elvis Presley and immediately moved in with him at Graceland for roughly three and a half years. 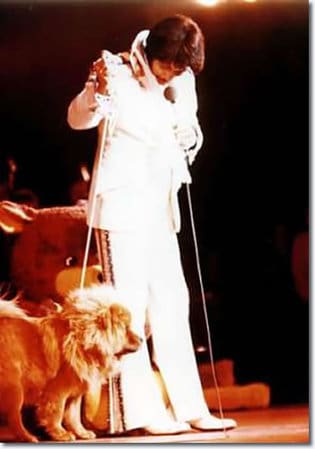 Elvis was a very tender soul. He had such a good heart. We literally bought out a pet shop one night. Elvis paid for about 20 dogs, just gave them out to his friends. And we kept this chow, little Getlow. He was a beautiful dog, but Elvis was going to get rid of him because we read an article that said chows turn on their masters 80 percent of the time. Elvis said, ‘I don’t want to have to be worried about leaving this dog with you, or come home and find you have to have plastic surgery’. But I said, ‘Oh, give the little fella a chance. He may turn out all right’. 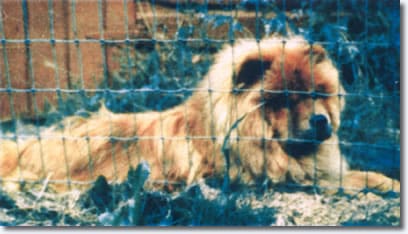 So I raised him, and he turned out to be as gentle as a kitten. He was our sweetheart. But he had a congenital kidney ailment. I don’t know if that made him so lethargic he didn’t feel like being mean, but he had a wonderful disposition. About three o’clock one morning, Getlow was acting really strange, so we had a doctor come over. He said, ‘I don’t think the dog will make it through the night’.

So Elvis leased a Learjet and flew Getlow, my girlfriend, Jeannie LeMay and me, and the doctor up to Boston to a special clinic for kidney dialysis. We left him up there for about three months. But he didn’t live long after that. He was only about a year old. We were on tour when he died, and we were coming home on his plane when they told us. Elvis just cried.