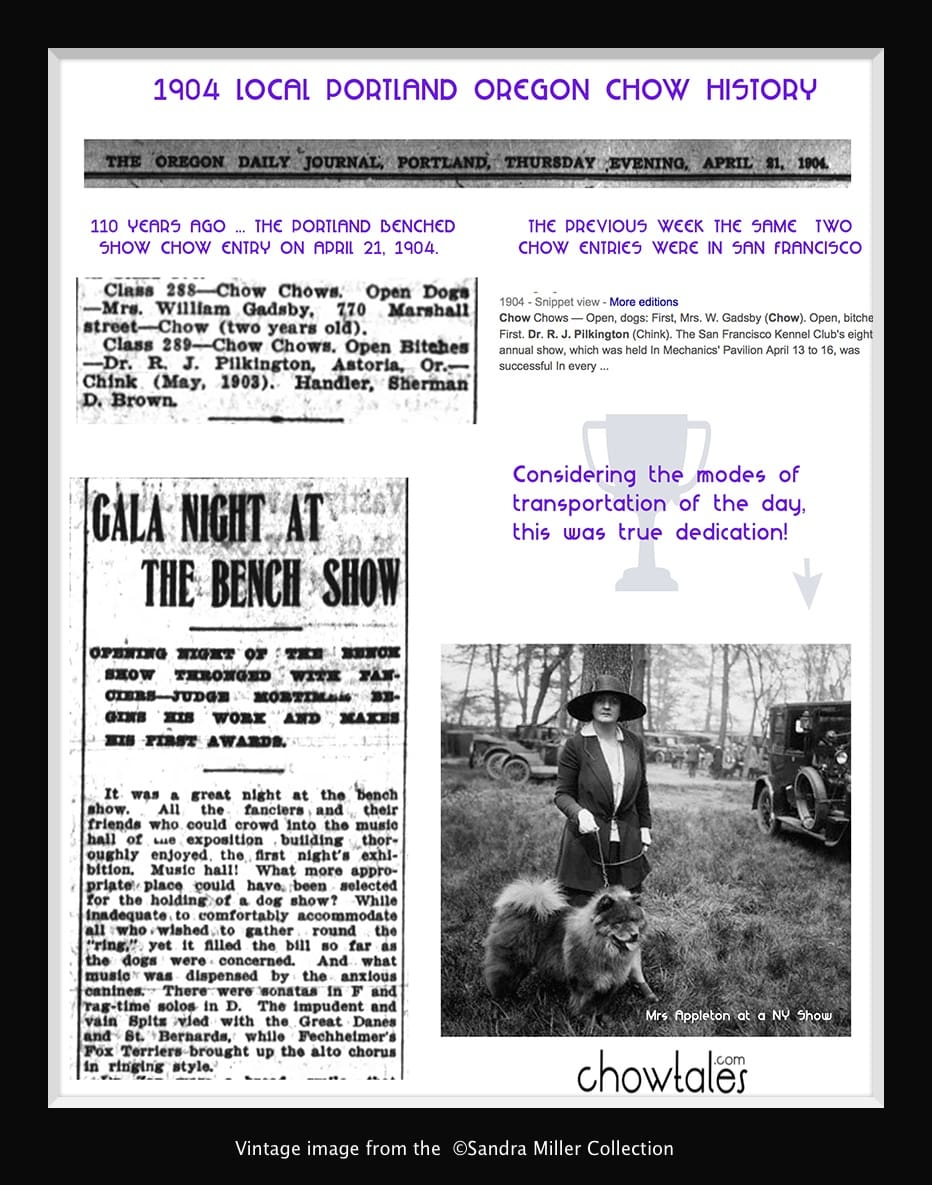 When I discovered this article about our local Portland Oregon Benched show in 1904, it really struck a chord.   How exciting to see what dogs were entered and my imagination runs wild thinking of what those two dogs looked like in person.  Dr. Pilkington who owned the dog “Chink” actually has a handler listed.   I researched the Dr. a bit and see he was on a lot of committees to eradicate VD in our armed services.  I sure have fun researching this trivial stuff

The  most interesting part of my research came when I quickly found that Mrs. William Gadsby, owner of the other Chow entered……. was the wife of a celebrated Oregon pioneer.  Below is his bio

In the death of Captain William Gadsby, which occurred on the 20th of September, 1918, Portland lost a representative citizen and business man who had long been identified with its commercial interests as proprietor of a large furniture and carpet house at the corner of First and Washington streets. He was ever actuated by a laudable ambition and his energy and determination enabled him to overcome all obstacles and difficulties in his path. In fact, in his vocabulary there was no such word as fail and the trials which always beset a business career seemed to serve but as an impetus for renewed effort on his part.

Mr. Gadsby was of English birth and lineage. He was born January 18, 1859, in Birmingham, England, where the family name has long been associated with mercantile enterprises. His father, William Gadsby, was but forty years of age when death cut short a career of great promise. He had married Frances Anne Moore, a daughter of Richard Moore, the owner of Prestop Park, in Leicestershire, England. She, too, spent her entire life in that country. In the family were five children. 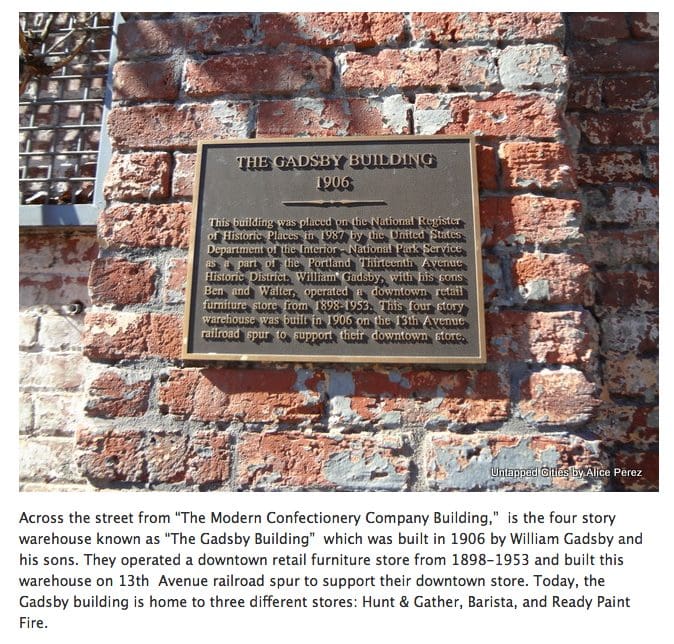 Portland became his destination and after establishing his family here he again turned his attention to the furniture trade and from the beginning met with notable prosperity. For a long period he conducted a large store at First and Washington streets, in the very heart of the commercial center of Portland. He carried an extensive and attractive line of furniture and carpets and his sales reached a notable figure. He ever realized the fact that satisfied patrons are the best advertisement and, moreover, he ever felt the truth of the old axiom that honesty is the best policy. His business methods were entirely straightforward, winning him a high standing in mercantile circles. Energetic and progressive, he kept in touch with the trend of the trade at all times and the finest that the markets in his line afforded could be at all times found in his store.

Below, is a very rare photo of a local Portland Oregon Chow (circa 1910)  who was one of the winners at the Portland Kennel Club show in the infancy of the breed showing up on the American West Coast. See notes on photo. WOW..what a find! 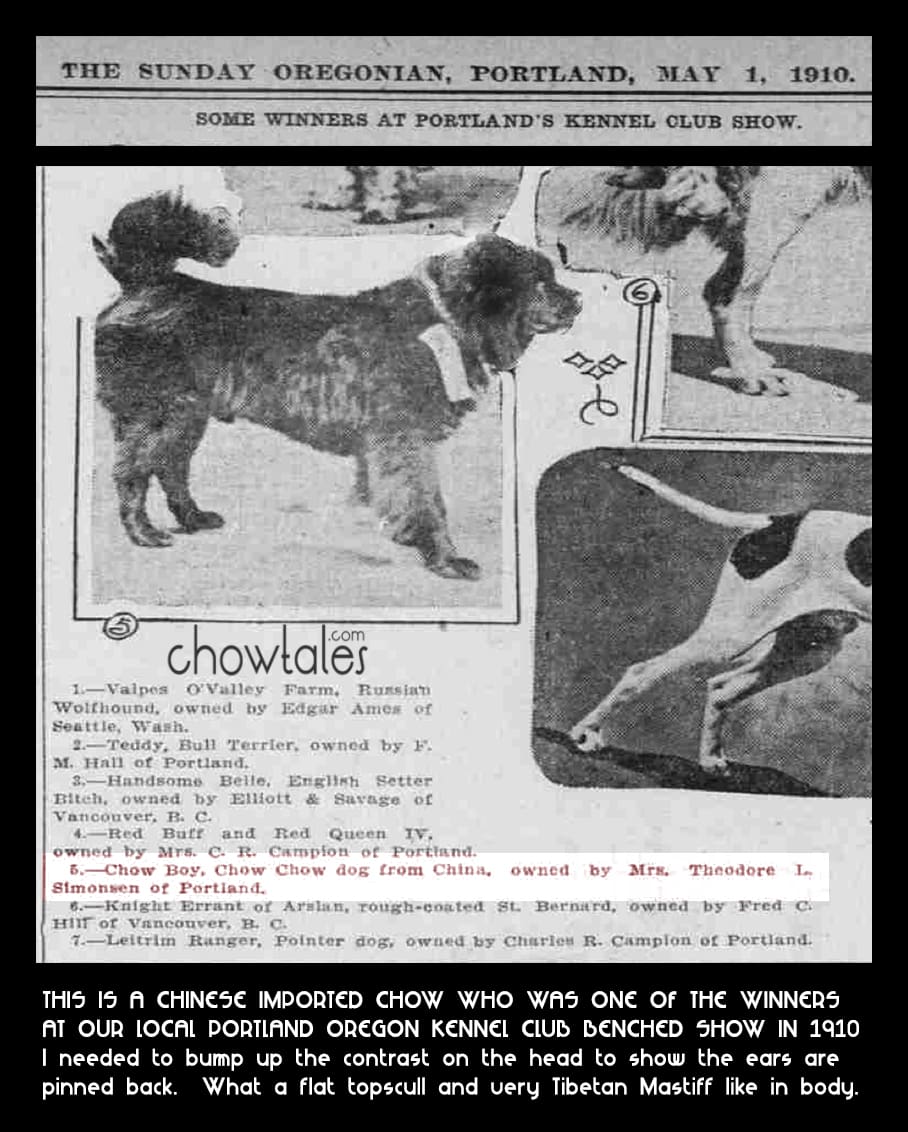