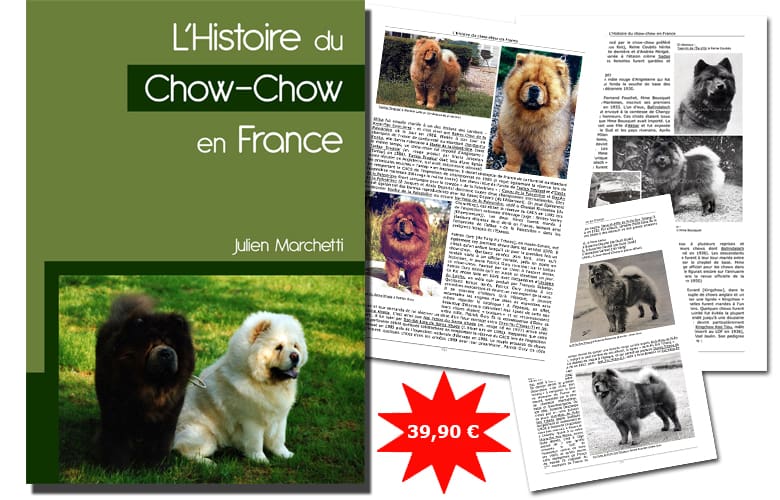 Our wonderful  friend and French chowist Julien Marchetti , curator of the pedigree database CHOWS WHO has written a gorgeous new book about the history of the Chow Chow in France.  The book is available now  and this is a Limited Edition  so  act fast if you are interested.   A few details…the book is written in French and comprised of almost 50% photos which makes it fascinating to both French and non French readers and most certainly a treasured collectible.

Julien approached me earlier this year asking if I had any French chow history that he might not have in his extensive collection and I managed to dig out a couple of treasures he did not have yet.  That always feels so good to find those puzzle pieces.  He then asked if I would write the Foreward to the book since we have such a similar view on the historical significance of the Chow,  and I was ABSOLUTELY HONORED at the opportunity.

Below is the Foreward in English to give my readers general feel for the book content.  I”m so thrilled to see this publication and want to congratulate and thank you Julien for preserving these pages of Chow Chow history for all to enjoy and study.  MERCI BEAUCOUP my friend!

A breed of dog as engrained in history as the Great Wall of China, protector of temples, hunter, companion … status symbol of royalty and celebrities. To study his history reveals far more than dates and places. The living relic we call the Chow Chow divulges centuries of captivating stories to those who wish to seek them.

My own personal Chow ‘tale’ began outside a grocery store. As I stepped out of my car, I happened to glance at the neighboring vehicle and my heart skipped a beat. A regal bright red Chow was quietly sitting in the driver’s seat waiting for his master to return. Needless to my chance encounter led to my love affair with the breed.

As fate would have it, I ended up befriending that boy “Ching” when I met him on a walk with my own new chow puppy. He was everything I knew a chow should be, but in the 1980’s he was considered not heavy enough to show, despite his overall perfection. In retrospect, I would give anything to have had the opportunity to use him as my model when I created the drawings for the CCCI Illustrated Standard.

The breed has changed considerably from those dogs of working origin that arrived in Britain in late 19th century. In less than 150 years, through selective breeding for heavier bone, head, and coat, the Chow has evolved into a canine more closely resembling a teddy bear than my stylish and athletic “Ching”.

Unfortunately, the original chow blueprint is fading fast. With each passing generation, the aristocratic chow chow is slowly disappearing. As breeders, I truly feel we have an inherent responsibility and honor as custodians of the chow standard, to preserve the breed type as it was handed down to us through those first imports from the Orient.

The study of Chow history on a personal scale is important, as understanding the origins helps forge an appreciation for how our passion for this breed and it’s intriguing past, fit into a broader purpose. It truly is a journey of many lifetimes, canine and human alike. Woven together from the past …giving insight to the present… forging the tools to protect the future of the ancient Chow Chow dynasty.