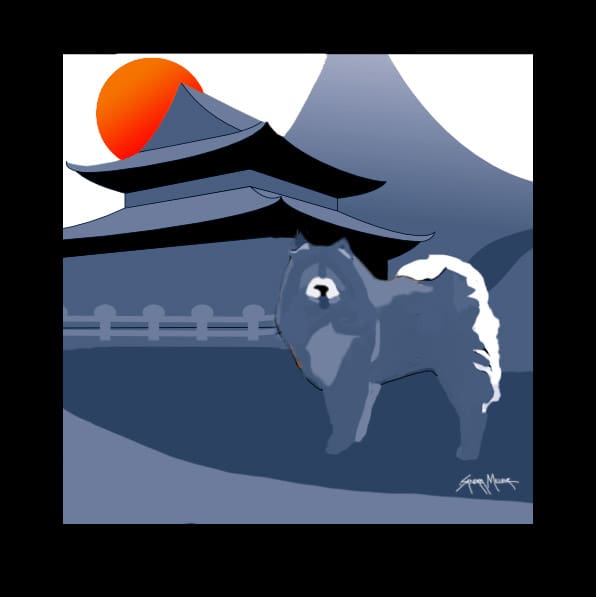 The article you are about to read below is one of the single most important references we have today to original Chinese Chow type, character and overall description of the breed in his homeland.  There have been various published “mentions” of the legendary blue chows being raised by monks in China and Mongolia, but rarely are these unedited, first-hand accounts found in their entirety, of Dr. Abshagens encounter with “50 splendid, unbelievably beautiful blue Chow Chows”.

Please sit back with a steaming cup of Oolong tea, and take in a breathtaking written “visual” that only this very lucky and observant man (a chow owner himself) could describe so eloquently! I transcribed the original scanned article for ease of reading.

ARCHIVE NOTES: Dr. Abshagen’s visit to the monastery was somewhere in the timeframe of  1937-1945, during the span of the China/Japan conflict mentioned (“Paotao” in the article could very likely Baotou). There are other monasteries within Inner Mongolia, but this one matched up the closest so far using the Dr’s article reference points. Many monasteries and their records disappeared during The Cultural Revolution so I am continuing my research to confirm the actual location the doctor visited.

“We are grateful to Dr. K.H. Abshagen for what is probably the one and only description of the legendary Monastery Chow Chows in their homeland, which follows”     -C.E. Collett

Had Miss Collett of the English Chow Chow Club, not specially asked me to do so, I should probably never have come to write about my experiences with Chow Chows in their homeland. Although I am a great lover and admirer of this unusual breed of dogs and have in the course of the years had various fine examples in my possession, I must acknowledge that I don’t feel myself an expert in the Chow-sphere, since I am neither a breeder nor a judge.

During the short time that my wife and I have been back in Europe, we have become conscious of how many misconceptions there are about these splendid dogs and how grievously this breed, on the whole, differs from the true Chinese Chows. As we were able to get to know and prize them there.  I hope in this article to show European Chow breeders quite clearly how far their breeding today is on the wrong track.

It is not true that Chow Chows in China are street dogs and only fit to be eaten. On the contrary. The Chow so rarely appears in the street there that in Peking and elsewhere I was repeatedly approached by distinguished Chinese where I went walking with my dark red Chow bitch, Kin Ko.  In their broken English, they said: “Fine dog, Chinese dog, very rare, very expensive. Do you expect any children from her?”  They then handed me their visiting cards with the polite request that I should let them know when we were looking for buyers for the children!

The `dog meat` that despite all prohibition is still secretly offered for sale in some Chinese harbor towns is decidedly not from purebred Chows, but from true curs, which are met with in China as they are all over the world. Naturally, it is inevitable that among these mongrels there are some crossbreds with Chows which could easily be taken for Chows by those who don’t know. 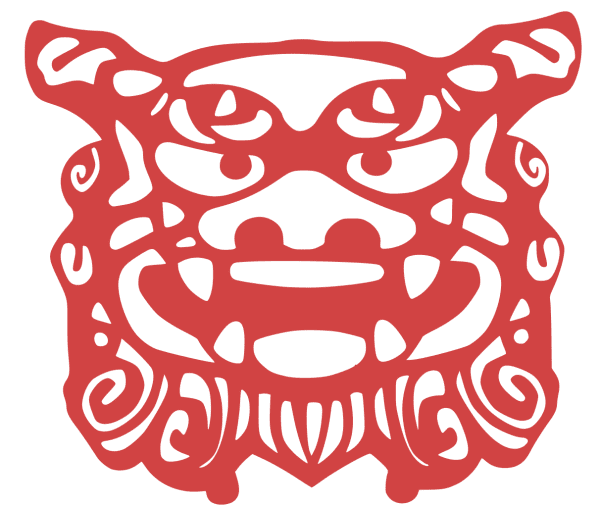 A very good friend of mine, an American lady who has lived a very long time in China and has friends in Chinese circles, told me a lot about the breed.  She herself bred Chows and my own show bitch, Kin Ko, came from her kennels in Peking, from pure Chinese Chows.  Through her, I learned also that Chows throughout China are bred very carefully accordingly to fixed principles by which the centuries-old tradition in this sphere is always maintained.

The finest variety was considered to be the “blue” Chow Chows from the Buddhist monasteries in Manchuria and Mongolia. I might have never have had sight of these almost legendary creatures, since these monasteries are strictly forbidden to foreigners, but quite by chance – certainly a happy one – I was able to enjoy the great privilege of seeing these blue Chow Chows from Mongolia with my own eyes, not only that:  I obtained much remarkable information from the abbot of one of these monasteries.

It was at the time of the so-called China conflict when the Japanese had occupied the greater part of North China, in the war against Chiang Kai Shek.  One day when I was making an official journey in Inner Mongolia, I came to Paoto, the headquarters of the Japanese North Division, and there came into contact with a major of the army medical service.  We started talking about the conditions in the country, and among other things, the major told me how he had met the abbot of a monastery of Iamas, which was about a day’s journey away from Paoto. He had gradually got friendly with this abbot, a friendship which was reinforced on his side by regular deliveries of various medical supplies for the inmates of the monastery and their cattle, and the many Mongolian nomads who had sought shelter in the monastery.

One fine day the major asked me whether I might perhaps be interested in going with him and taking this chance to have a look at a Buddhist monastery.  Although normally no foreigners were admitted, he thought he could get permission for me, with the help of the welcome deliveries of medical supplies.  Before we started in his rather antediluvian Ford he advised me to take along a strong stick “to keep the blue dogs away for me”.  You can imagine that my ears immediately pricked up; “BlueDogs”!  Were they really the famous blue Chows?  My growing impatience made the journey seem to last at least twice the time it really did……..

At last, after a tiring journey through the steppes covered with flowers and tall grass – it was June – we saw in the distance the monastery lying in the hollow of a gently sloping ridge.  When we got near it the gate opened and a large pack of dogs streamed out, fully 50 splendid, unbelievably beautiful blue Chow Chows!  And they were blue – bluer than the finest blue Persian cats; I think the color of a wild dove is the nearest thing to it.  For a moment I was overwhelmed by so much beauty at once.

Meanwhile, the dogs surrounded the car. Barking violently with the well-known and distinctive Chow bark, till they were called off by three monks and we were able to get out without hindrance. Although they let us alone after that, I felt safer with my walking stick in my hand.  But I could now see and examine them in peace.

This imposing group of fully 50 similar dogs was such a splendid spectacle that I am afraid that no description of mine will ever do it justice’ there was naturally no question of photography on this holy ground.  The most striking features of these splendid dogs, apart from their heavenly color, was the harmoniousness of their appearance, the uncorrupted quality of their build, their vitality, their fluid movements – those of truly natural creatures – and many of those other characteristics that I admire so much in wild animals; a certain untouchability, a not-yet-corruptedness and a sense of not-to-be “licked” by “culture”.

These Chows, like all Chows that I got to know in China, are somewhat smaller and also rather more slightly built; about 20-25 kg in weight, with a shoulder height of 45 -50 cm but for all that certainly no less imposing than their European cousins.  They have a very gloomy expression, without a trace of wrinkles such as a Bloodhound has; the smallest imaginable, rather slanting very dark, wide-spaced eyes’ a fairly distinct passage from the forehead to the bridge of the nose’ but not the Bulldog kind of deep stop that many modern Chow has.

I must add here that neither in this monastery nor any other in China, had anyone heard of entropion’ and indeed this kind of manifestation of degeneracy would be quite out of the question in a race so healthily bred and natural in their bearing.  The bridge of the nose and the mouth remain wide from the base up to the tip of the nose.  The skin is thick and free of wrinkles. The lips lock, so that the mouth remains visible looked at from in front or from the side, without overhanging jowls under which the lower jaw disappears.  The Chow Chow thus preserves its typical, wry grin. 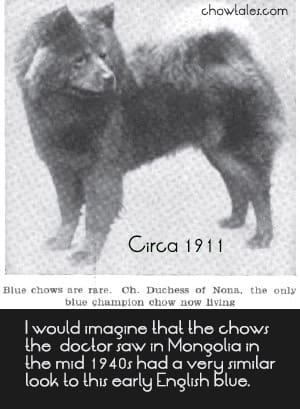 The small, triangular, thick ears, slightly rounded at the tips, are inclined attentively rather forward but are not so exaggerated that, looked at from the front, one looks straight at the tips or, seen from the side the upper line runs horizontally from the base to the tip – which in our part of the world seems to be considered the ideal.  The nose itself is fairly large and wide, with well-formed nostrils and coal-black!  Yes, even among these blue Chows! The teeth are strong and healthy and set in a straight line in the jaw, without any gaps between the individual incisors. Lips and palate are specklessly black, and the tongue is a deep dark blue without any trace of lighter coloring.  A red fleck excludes a Chow in China from being considered a Chow and stamps him automatically as a mongrel.

The hair is very thick and fairly harsh and not so long or soft and woolly as in Europe, and so does not spoil the harmonious outline.  The bones in the legs are very strong and straight but on the whole rather less coarse than among the products of European breeding.  The hocks also are placed much higher. The paws are indeed small, strong and round with strong black claws.  All in all, one could see that these sturdy, healthy Chows were equal in every respect to their very extensive tasks.  In the first place, they guard and protect the monastery and its inmates, then they serve to round up the hundreds of head of cattle, and finally, they are excellent hunting dogs, hunting a wide range of game from pheasants to bears.

Now for just a brief history of this particular race of blue Chows.  This monastery was founded in the 15 century by a reformed lamaistic branch of Tibetan Buddhism. Blue Chows were already bred there and throughout the following centuries plentiful records concerning breeding were kept ( a stud book?).

The only new blood that is introduced is through the occasional exchanges of Chows with Chows from other monasteries, thousands of kilometers apart from one another, reaching into Tibet. There is no attempt at crossing with other breeds, and such a policy, moreover, would not be in accord with the uniformity of the breed throughout China’ this, on the contrary strictly enjoins a very careful and consistently applied breeding with families.

Is it not therefore doubly regrettable that, while this breed in its ancestral homeland has been kept pure for hundreds, indeed for thousands of years, in the West breeders have, in characteristic features and peculiarities and the original beauty of this breed in their quest for change and so-called improvement!  Can the Chow Chow in Europe still be saved?