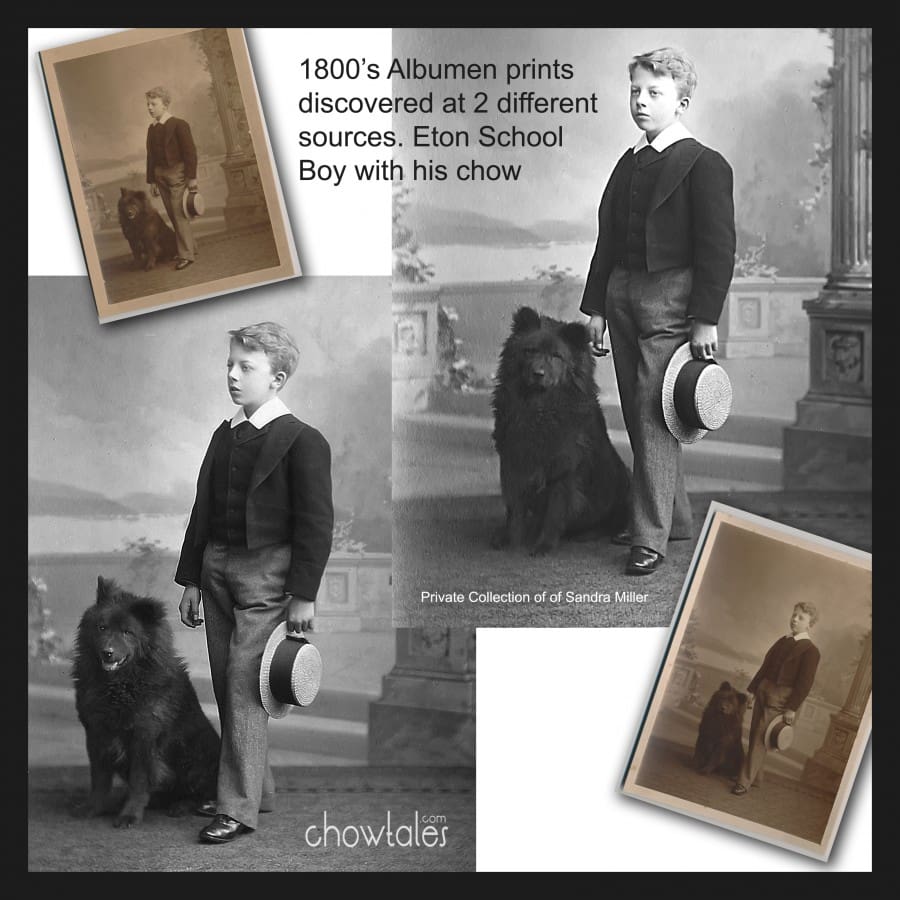 These two sepia “albumen prints”  you see in the collage above are in my private collection. Both of the same Eton School boy with his Chow, in two different poses, presumably from the same photoshoot.  To add to this rarity, I purchased each of these photographs from 2 different sources , years apart…both from the United Kingdom.

Eton College, often informally referred to simply as Eton, is an English boys’ independent boarding school located in Eton, Berkshire, near Windsor. It educates over 1,300 pupils, aged 13 to 18 years. It was founded in 1440 by King Henry VI as “The King’s College of Our Lady of Eton besides Wyndsor”

I did a lot of restoration work on these two prints using Photoshop to bring out the details, however with images this old and rare, I like to show both the original albumen photos in the condition they were found, and the restored version.  I like them both for different reasons.

My imagination whisks me away to a time when the famous pioneers of the breed, Lady Granville Gordon and Mrs Scaramanga were showing ground breaking chows such as CHOW VIII and  BLUE BLOOD.     Could this lovely dog in the photo be a product of one of these breeder’s litters?  There is a good chance of it as there were only a handful of chows residing in England when this photo was taken.

Albumen prints are a variety of photographic paper print in which a finely divided silver and gold image is dispersed in a matrix of egg white. Such prints constitute by far the largest category of objects in 19th century photographic collections. Albumen paper became the most widely used photographic printing material about 1855, and remained so until 1895; it did not disappear completely from photographic practice until the 1920’s.

The span of time during which albumen paper predominated in photographic usage represents not only an important formative period in photographic aesthetics and technology, It is also the era during which photography first began to be Integrated into a wide range of human activities, thus becoming an influence on the culture at large. This occurred in ways which we are only now beginning to appreciate. One ongoing example is our changing evaluation of the photographs of the American West and American Indian peoples; these images shaped attitudes toward the West at the time they were made–and still do–only now their power is magnified because for us, they embody both artistic achievement and deep historical significance.

Many other examples could be cited which would illustrate the growing Importance of 19th century photographs as cultural property. In most cases albumen prints are the primary original artifacts which constitute this cultural heritage. Therefore the conservation of albumen prints is one of the principal concerns in the whole field of the conservation of photographic materials.

Unfortunately, albumen prints as a group merit the urgent concern and attention of conservators. Very few survive in original condition. Approximately 85% of extant albumen prints suffer from the presence of a yellowish-brown stain in the highlights (nonimage areas), and almost as many exhibit overall image fading, with an accompanying shift in image color from purple or purplish-brown to a sickly yellowish-brown. Deterioration often includes a partial or severe loss of highlight detail. The staining, fading and color change may range from slight to very severe, but the extent of deterioration In albumen prints as a whole Is much more advanced than in nearly every other variety of photographic paper, including types which pre-date albumen papers.