You are here: Home / CELEBRITY CHOWS / JOAN CRAWFORD AND HER CHOW 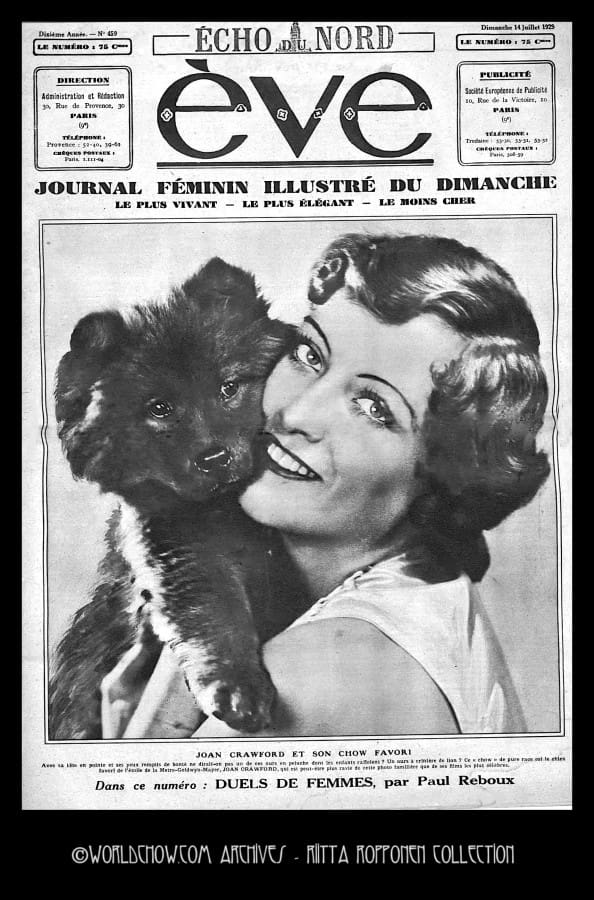 Many chow memorabilia collectors  have most likely at one time or another seen this image of a young Joan Crawford on vintage postcards and tobacco/tea cards…HOWEVER…. this full sized version submitted to CHOWTALES by Riitta Roponen from Finland is an absolute priceless treasure!   Thank you so much Riitta for letting me share this in the archive as we would most likely would never see one like it otherwise. 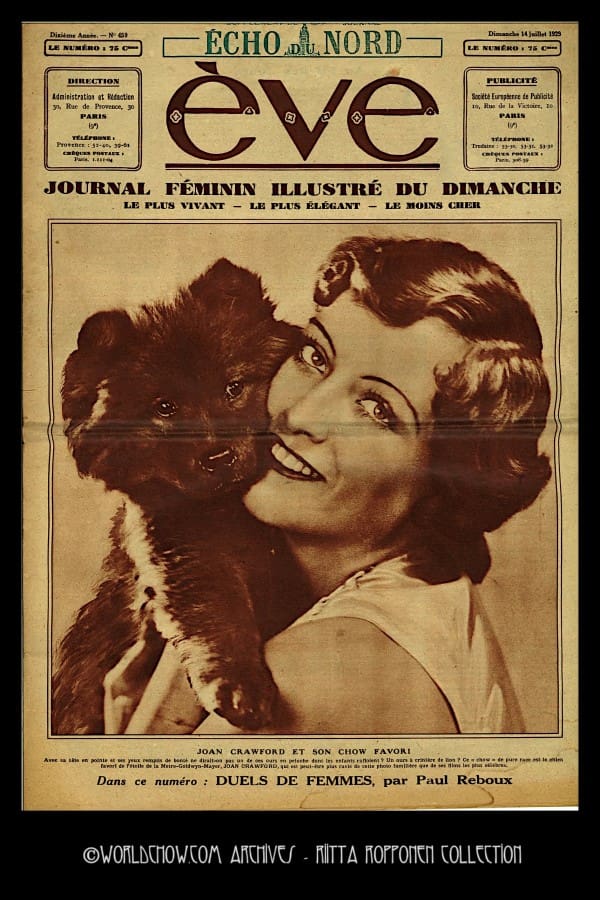 BELOW IS ANOTHER PHOTO OF JOAN CRAWFORD IN HER YOUNGER DAYS

Starting as a dancer in traveling theatrical companies before debuting as a chorine (a chorus girl) on Broadway, Crawford signed a motion picture contract with Metro-Goldwyn-Mayer in 1925. Initially frustrated by the size and quality of her parts, Crawford began a campaign of self-publicity and became nationally known as a flapper by the end of the 1920s. In the 1930s, Crawford’s fame rivaled, and later outlasted, MGM colleagues Norma Shearer and Greta Garbo. Crawford often played hardworking young women who find romance and success. These “rags-to-riches” stories were well received by Depression-era audiences and were popular with women. Crawford became one of Hollywood’s most prominent movie stars and one of the highest paid women in the United States, but her films began losing money and by the end of the 1930s she was labeled “Box Office Poison”. But her career gradually improved in the early 1940s, and she made a major comeback in 1945 by starring in Mildred Pierce, for which she won the Academy Award for Best Actress.

In 1955, she became involved with the Pepsi-Cola Company through her marriage to company Chairman Alfred Steele. After his death in 1959, Crawford was elected to fill his vacancy on the board of directors but was forcibly retired in 1973. She continued acting in film and television regularly through the 1960s, when her performances became fewer; after the release of the British horror film Trog in 1970, Crawford retired from the screen. Following a public appearance in 1974, after which unflattering photographs were published, Crawford withdrew from public life and became increasingly reclusive until her death in 1977.

Crawford married four times. Her first three marriages ended in divorce; the last ended with the death of husband Alfred Steele. She adopted five children, one of whom was reclaimed by his birth mother. Crawford’s relationships with her two older children, Christina and Christopher, were acrimonious. Crawford disinherited the two and, after Crawford’s death, Christina wrote a “tell-all” memoir, Mommie Dearest, in which she alleged a lifelong pattern of physical and emotional abuse perpetrated by Crawford. (SOURCE-Wikipedia)

BELOW IS A WONDERFUL VIDEO OF JOAN IN HER EARLIER YEARS ON THE SCREEN. GREAT PHOTOS!