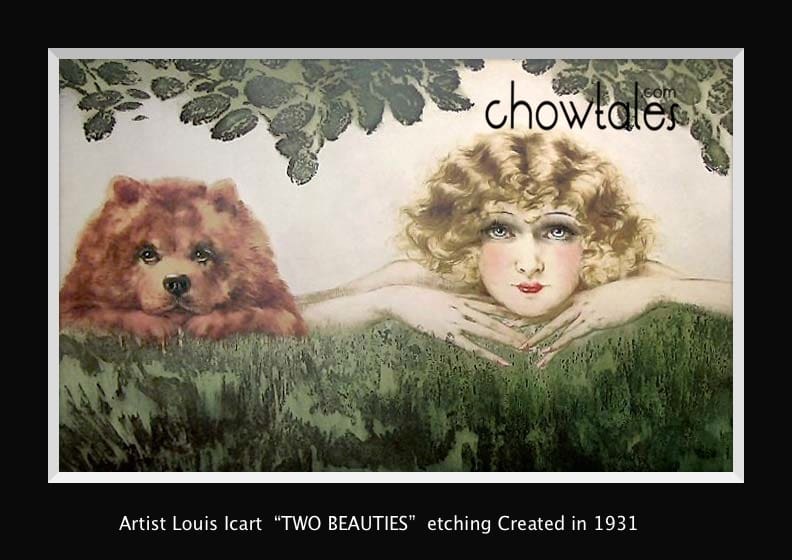 Chances are, you have seen reprints of this stunning etching by Louis Icart online, in museum shops, and books.   It was created by the artist in 1931 of his wife Fanny and her chow “Dollar” who the French painter purchased in the United States.

The original etching was reproduced in an edition of 350 and recently I discovered one of them up for auction on Ebay with a starting bid of US $42,000.00  CLICK SCREENSHOT BELOW to read the details at Ebay 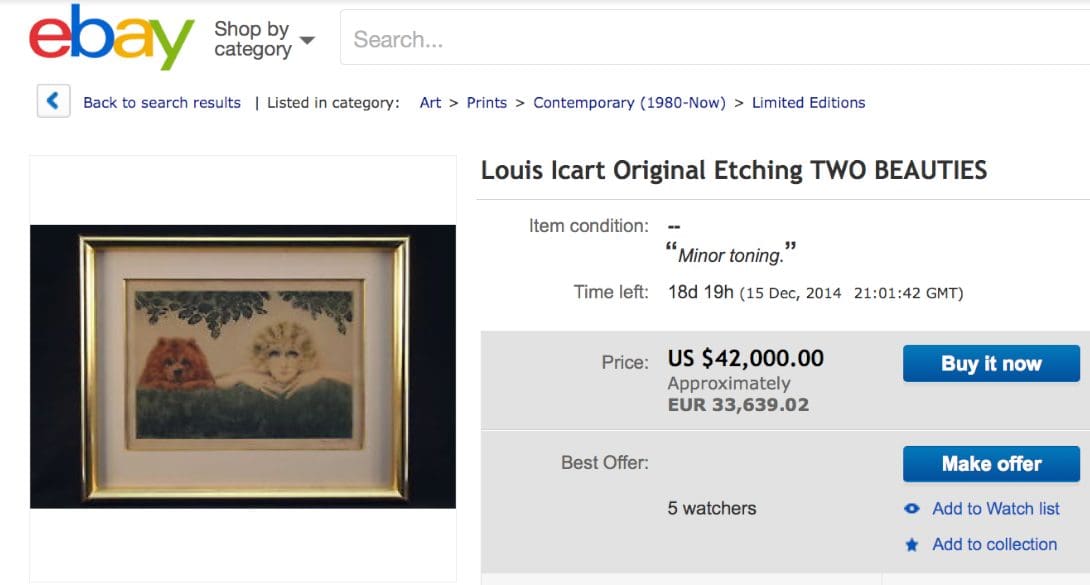 The dimensions of the etching itself are dimensions of the image area being 16 3/4″ X 24 5/8″ (from the auction description).  It’s nice to have these details for the archive.  What a treasure for the lucky person who ends up purchasing this classic and rare Icart etching 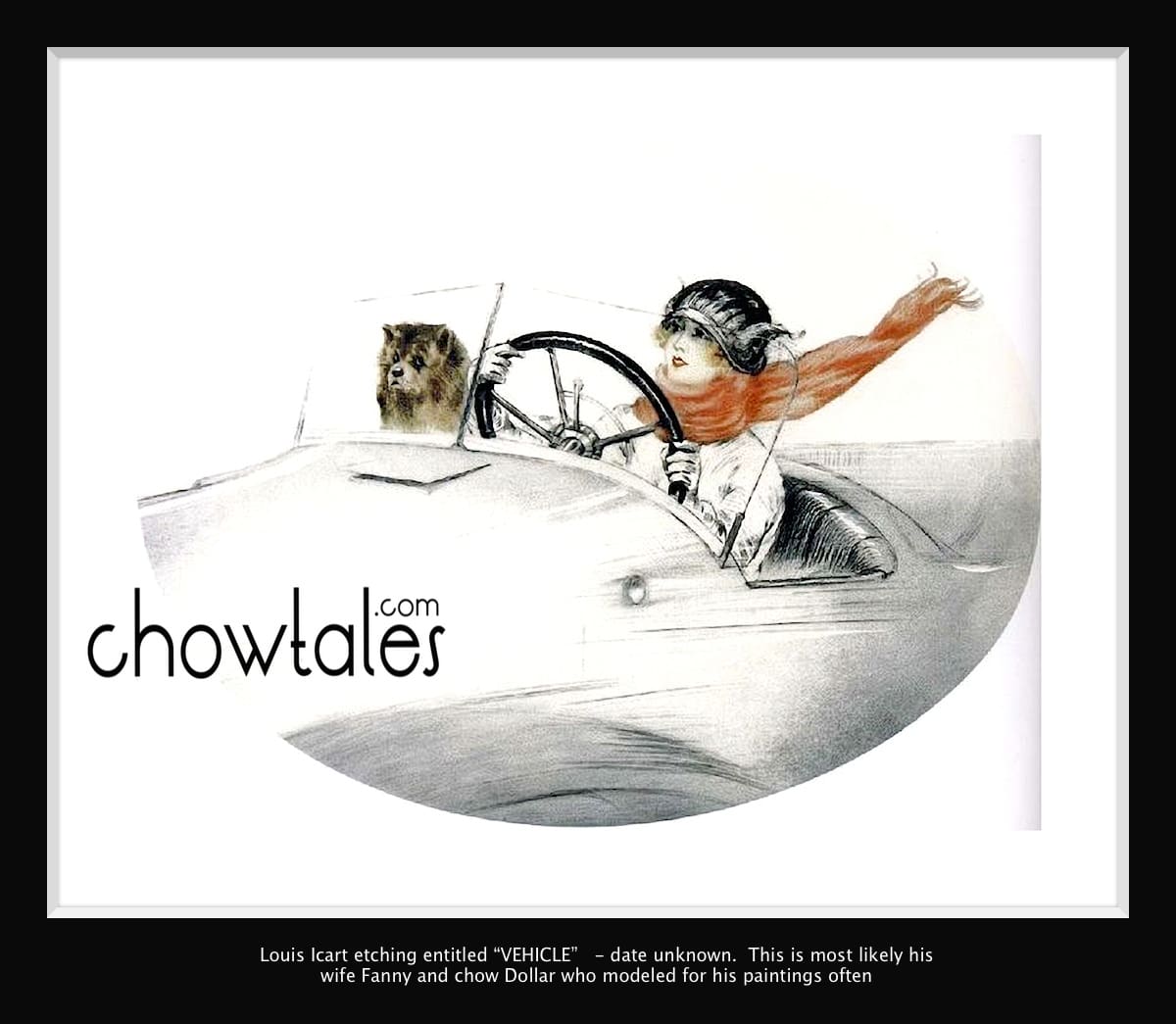 BELOW IS LOUIS ICART BIOGRAPHY-source

Louis Icart was born in Toulouse, France. He began drawing at an early age. He was particularly interested in fashion, and became famous for his sketches almost immediately. He worked for major design studios at a time when fashion was undergoing a radical change-from the fussiness of the late nineteenth century to the simple, clingy lines of the early twentieth century. He was first son of Jean and Elisabeth Icart and was officially named Louis Justin Laurent Icart.  The use of his initials L.I. would be sufficient in this household. Therefore, from the moment of his birth he was dubbed ‘Helli’.  The Icart family lived modestly in a small brick home on rue Traversière-de-la-balance, in the culturally rich Southern French city of Toulouse, which was the home of many prominent writers and artists, the most famous being Henri de Toulouse-Lautrec.

Icart fought in World War I. He relied on his art to stem his anguish, sketching on every available surface. It was not until his move to Paris in 1907 that Icart would concentrate on painting, drawing and the production of countless beautiful etchings, which have served (more than the other mediums) to indelibly preserve his name in twentieth century art history. When he returned from the front he made prints from those drawings. The prints, most of which were aquatints and drypoints, showed great skill. Because they were much in demand, Icart frequently made two editions (one European, the other American) to satisfy his public. These prints are considered rare today, and when they are in mint condition they fetch high prices at auction.

Art Deco, a term coined at the 1925 Paris Exposition des Arts Decoratifs, had taken its grip on the Paris of the 1920s.  By the late 1920s Icart, working for both publications and major fashion and design studios, had become very successful, both artistically and financially.  His etchings reached their height of brilliance in this era of Art Deco, and Icart had become the symbol of the epoch.  Yet, although Icart has created for us a picture of Paris and New York life in the 1920s and 1930s, he worked in his own style, derived principally from the study of eighteenth-century French masters such as Jean Antoine Watteau, François Boucher and Jean Honoré Fragonard.

In Icart’s drawings, one sees the Impressionists Degas and Monet and, in his rare watercolors, the Symbolists Odilon Redon and Gustave Moreau.  In fact, Icart lived outside the fashionable artistic movements of the time and was not completely sympathetic to contemporary art.  Nonetheless, his Parisian scenes are a documentation of the life he saw around him and they are nearly as popular today as when they were first produced.

In 1914 Icart had met a magical, effervescent eighteen-year-old blonde named Fanny Volmers, at the time an employee of the fashion house Paquin.  She would eventually become his wife and a source of artistic inspiration for the rest of his life.