Georgia O’Keeffe is a 20th-century American painter best known for her flower canvases and southwestern landscapes,….she has always been a silent mentor and rock star in my eyes and heavily influenced my earlier watercolors.  In my research as I found out more about her deep devotion to her own chow chows….I became even more entranced by this amazing woman.

She attended the CCCI National Specialty in 1973 in Fort Worth Texas, with her agent at the time Doris Bry. where they met Dr. Samuel Draper, author, breeder, judge, and owner of Liontamer Kennels

As a result of their meeting, Miss O’Keeffe and Doris Bry made a trip to Liontamer Kennels to visit Dr. Sam in Monroe NY where she described each of his chows as only an artist could  “this dog’s head is  a giant orange chrysanthemum”…..”and this one is a magnificent scarlet pin cushion”    (source The Book of the Chow Chow by Samuel Draper)

Many of these images of her chows were tucked into an online archive that I started digging into and found some unbelievable treasures.  Image credit:  Georgia O’Keeffe Museum and archives 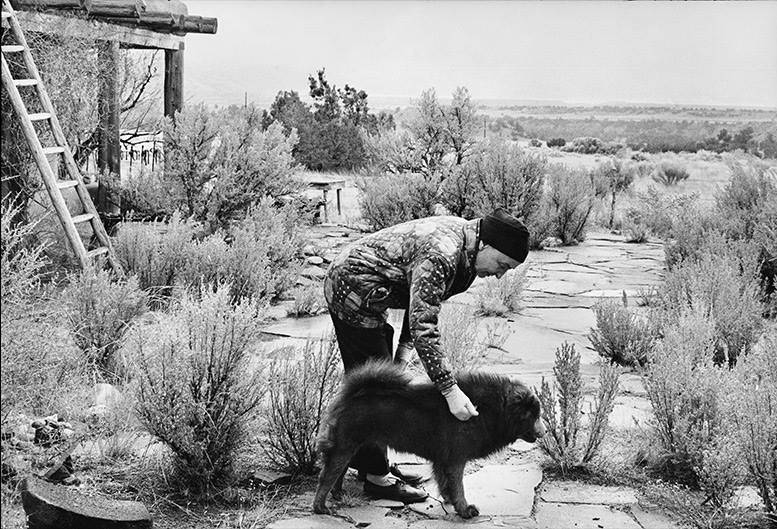 A neighbor gave Georgia two blue Chow puppies she named Bo and Chia for Christmas in 1953. Bo was her favorite, but sadly he was hit by a truck and killed. But she became devoted to the Chow breed and ended up having six during her lifetime including Bobo, Jinga, and Inca.  She referred to her chows fondly as “Little People”.  Once Georgia owned a chow…it was the only breed she had thereafter.

NEW INFORMATION ADDED NOVEMBER 15, 2016 –  From Chow Chow Club Inc. historian Dottie Everett.  JoAnne O’Brien she mentions was the owner of Linnchow Kennels,  daughter of an equally successful family in the breed since the 1930s.  Thank you, Dottie, for this valuable information.

“Sandra did you know that two of Georgia O’Keeffe’s Chows came from JoAnne O’Brien’s LinnChow Kennel? JoAnne told me about it and showed me a letter from Georgia O’Keeffe thanking her for “the wonderful companions “

Here is a pedigree from the Georgia O’Keeffe website for the blue male chow INCA which has Linnchow dogs in the pedigree, however, JoAnne O’Brien is not listed as the breeder on this particular dog. 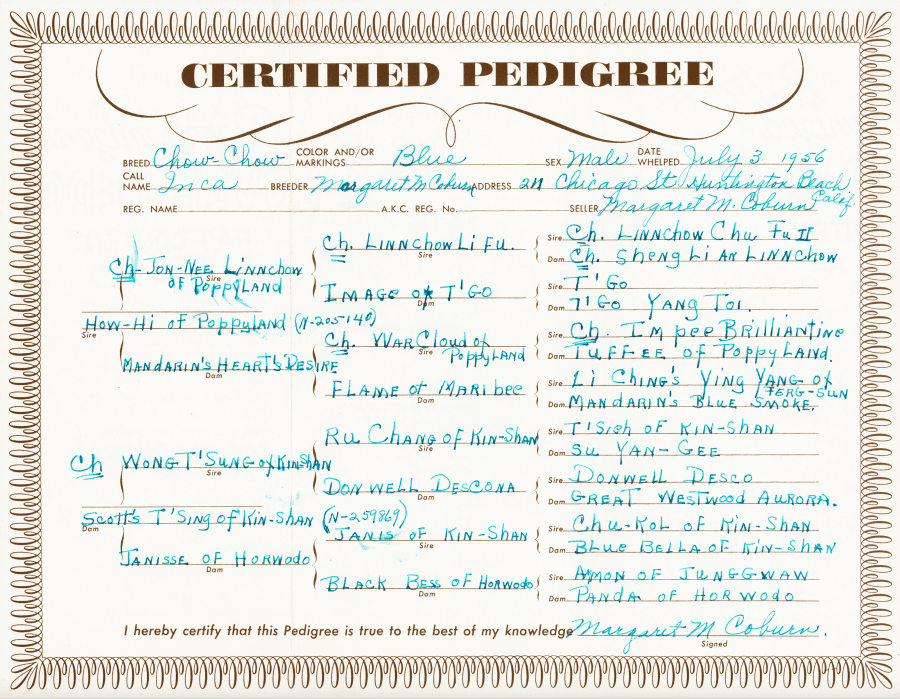 “O’Keeffe’s life was very much centered around her Chows: “they sleep in my room at night and in the day are always just outside the door.” One hot summer days she refused to embark on her annual painting trips by car, fearing the weather was dangerous for her pets and she declined to install a new heater in her New Mexico ranch as the only place it would fit was her dog’s favorite sleeping spot. She even commissioned a shawl to be made from her dogs’ coats once they shed in spring.

Bo (or Bobo or Beau, as she also referred to him) was the favorite of all O’Keeffe’s canine friends; “big with a strong smooth coat,” she described him as the “town boss” of Abiquiu, where he had a fierce reputation. When he died, O’Keeffe buried Bo under a cedar tree and wrote, “I like to think that probably he goes running and leaping through the White Hills alone in the night.” O’Keeffe’s final companion was Jingo, a red Chow who died not long before the artist herself.”   ~text by Daisy Woodward 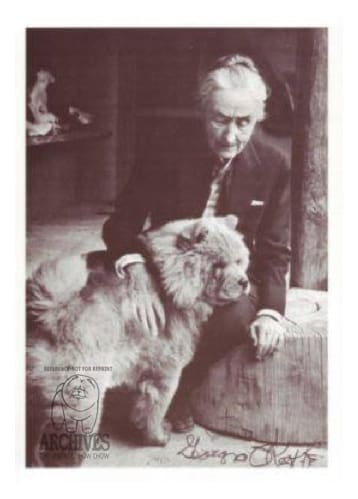 As an artist myself, my breath was literally taken away when I saw Georgia O’Keeffe’s work at an exhibition in San Francisco for the first time in person.   I walked into the exhibit room and was completely taken aback by the massive scale of the paintings …..tears instantly started flowing.  I looked around to see if I was totally embarrassing myself and saw that most of the other attendees were moved to tears as well. 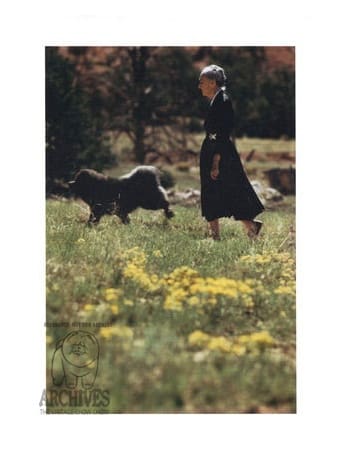 Below is an incredible video of O’Keeffe talking about her work, at her home in New Mexico in 1977. She was nearly 90 at the time.

ACTRESS- Billie Burke -Wizard of Oz "Glinda" with ...
THE PALACE CHOW - Was this Queen Victoria or Alexa...
1920s-30s MY-CHOW dog and cat food can
1899 Original Stereoview card of Admiral Dewey and...