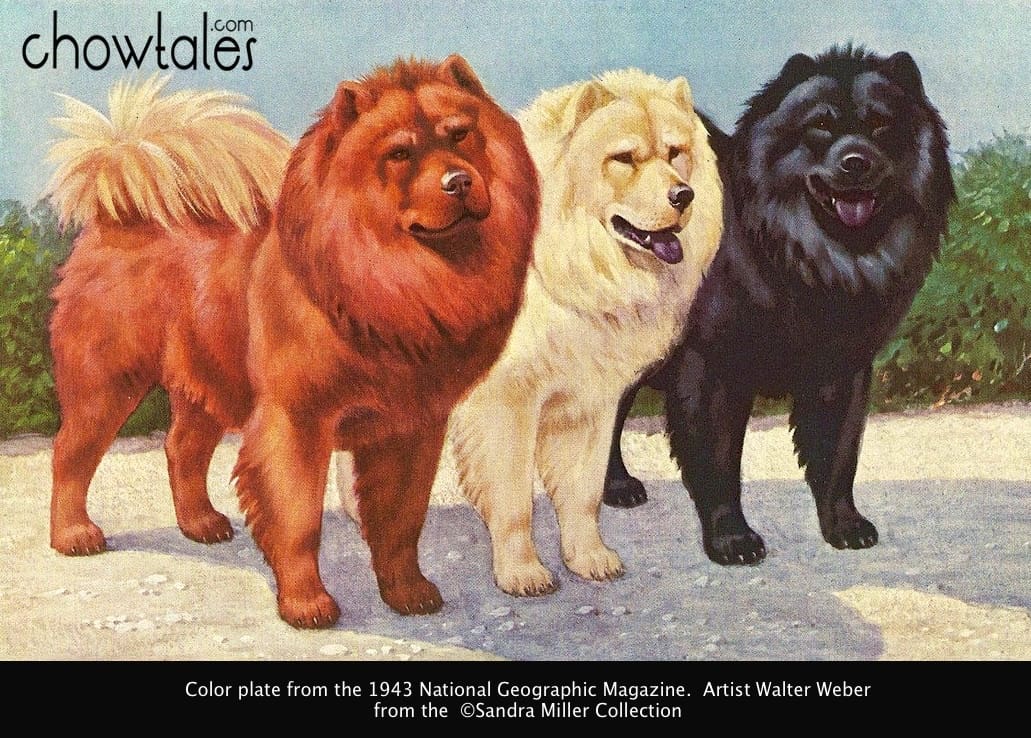 This beautiful color plate by Walter Weber is one I treasure , as the artist in one I greatly admire.   He was most famous for his paintings featured in The National Geographic Magazine from 1939 to 1968. He painted prolifically and beautifully, over a wide range of nature subjects, including deer, birds, cats,  and dogs.  Almost all the paintings featured in The National Geographic Book of Dogs were painted by him)

Walter was born on May 23, 1906, in Chicago, Illinois. His parents were poor immigrants, and he grew up in a family of eleven children. His artistic talent was recognized early on and at age nine he began taking classes on Saturdays at Chicago’s Art Institute. At ten he began visiting local bars where he would sketch birds and mammals for ten to fifty cents. He used this money to buy more art supplies. Walter went to college at the University of Chicago and graduated with honors in 1927, earning a BS degree in zoology and botany. He was also a member of the honors fraternity, Phi Beta Kappa. He also continued his studies at the Art Institute. The Canadian animal artist, Allan Brooks, instructed him for four months, and he spent time working with Carl Rungius, a big game painter, as well.

From 1928 to 1931, Walter worked for the Field Museum of Natural History in Chicago as a collector and artist. While in this position he was able to travel the world on research trips. After this he worked as a freelance artist, contributing to Birds of Minnesota, Traveling with the Birds, and Homes and Habits of Wild Animals. In 1935, he took a job as a wildlife technician with the National Park Service in Oklahoma and Texas. After a year there he became the National Park Service’s chief scientific illustrator in Washington, D.C. In 1941, he moved on and became an ornithologist at the US National Museum.

Walter returned to freelance work from 1944 to 1949. During this time he worked under contract for the National Geographic Society and for private collectors, did ink drawings for the book Meeting the Mammals, and painted covers between 1944 and 1957 for seven books sponsored by the Wildlife Management Institute. In 1949, Walter worked as staff artist and naturalist for the National Geographic Society, traveling to much of the United States, Latin America, Europe, and Africa. He stayed in this position until he retired in 1971. 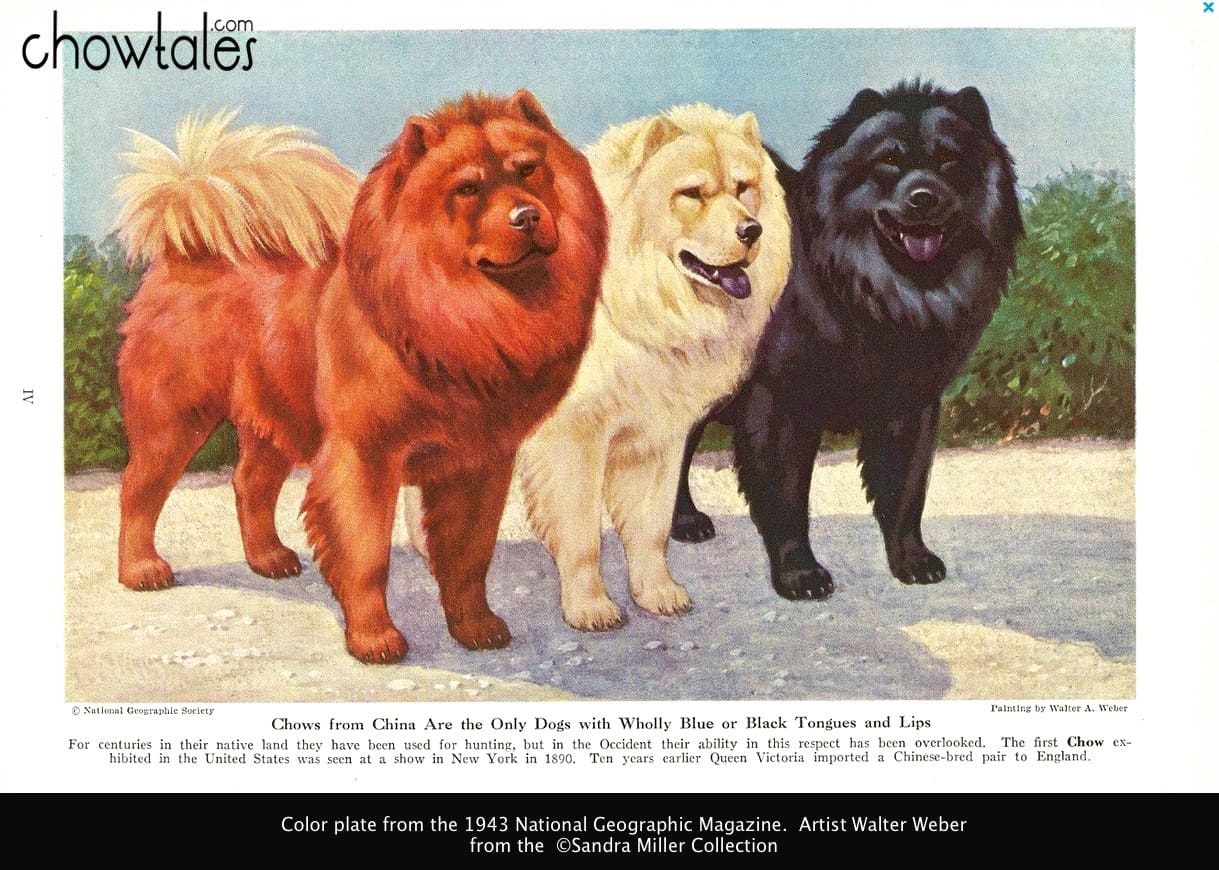 TEXT READS:   Chows from China Are the Only Dogs with Wholly Blue or Black Tongues and Lips

For centuries in their native land they have been used for hunting, but in the Occident their ability in this respect has been overlooked.  The first Chow exhibited in the United States we seen at a show in New York in 1890.  Ten years earlier Queen Victoria imported a Chinese-bred pair to England

Throughout his lifetime, Walter’s art appeared in a large number of varied publications. Walter designed a symbol for the cover of the then new Journal of Wildlife Management using Egyptian hieroglyphics. This symbol now appears on all publications and membership pins of The Wildlife Society. Over 250 of his paintings (some signed with his pseudonym “Al Kreml”) were featured on stamps issued by the National Wildlife Federation from 1940 to 1961. From 1941 to 1954, he created cover illustrations for the Pittman-Robertson Quarterly. He was the first person to design two federal duck stamps, having been asked to do so in 1944 and then winning the first open national competition for a design in 1950. The first was of white-fronted geese, while the second portrayed trumpeter swans.

He wrote and illustrated an article for the National Geographic Society, as well as illustrating nineteen others between 1939 and 1968. His drawings and paintings were featured in the BOOK OF DOGS, Song and Garden Birds of North America, Water Prey and Game Birds of North America, Wondrous World of Fishes, Wild Animals of North America, Birds of Colorado, Birds of the Republic of Panama, and the last one, in 1975, was Breeding Birds of North Dakota. Unfortunately, only four of the 24 paintings and some of the many drawings he had prepared for the book, Fading Trails—The Story of Endangered American Wildlife, were used, the firm contracted by the government citing the restrictions on supplies during World War II as the reason. He and others were disappointed when it was published in that reduced form in 1942. The Treasury Department used the eagle from Walter’s painting of an eagle and an osprey on dollar coins starting in 1971. This same eagle had previously been copied by an artist who created a patch on the suits of the Apollo 11 Space Team.

Walter was very helpful and caring toward younger artists looking for help. He was known to give away his art to those he liked, but quote extremely high prices for those he did not. He was very upset when his art was plagiarized, but was not opposed to its use when requested, including the use by the Territory of Papua and New Guinea of some of his bird paintings for their postage stamps.

He painted an enormous variety of nature-related subject matter with amazing style and accuracy. In 1967, the Department of the Interior gave him its highest honor, the Conservation Service Award. His artistry has been inspirational for many people.

Walter was elected to membership in the Washington Biologists’ Field Club in 1971.