You are here: Home / EARLY CHINA IMPORTS / 1911 Article – How to buy Chow Dogs in China 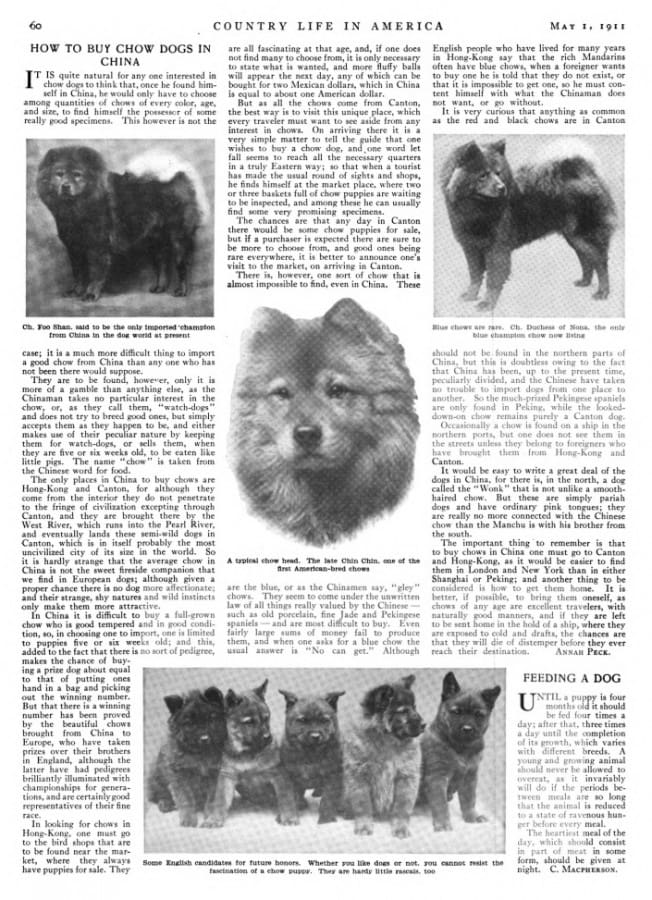 This very interesting article circa May 1, 1911 from Country Life In America Magazine highlights insiders secrets for importing chows from Hong Kong and Canton into America. After visiting Hong Kong a number of times myself in recent years, it comes as no surprise that the suggested best place to find good chow puppies was at the “bird market”.

The text is so blurry in this copy, so for ease of reading I have transcribed the article (can you say CROSSED EYES) and re inserted the wonderful photos for you to see much larger. Thank you Dennis Tang in Hong Kong for sending this fascinating piece of early Chow history.

HOW TO BUY CHOW DOGS IN CHINA by Annah Peck

It is quite natural for any one interested in chow dogs to think that, once he found himself in China, he would only have to choose among quantities of chows of every color, age, and size, to find himself the possesor of some really good specimens.  This however is not the case: it is a much more difficult thing to import a good chow from China than any one who has not been there would suppose. 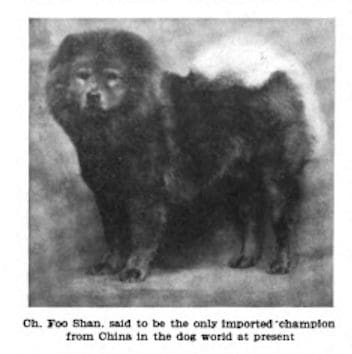 They are to be found however, only it is more of a gamble than anything else, as the Chinaman takes no particular interest in the chow, or, as they call them, “watch-dogs” and does not try to breed good ones, but simply accepts them as they hapen to be, and either makes us of their peculiar nature by keeping them for watch-dogs, or sells the, when they are five or six weeks old, to be eaten like little pigs. the name “chow” is taken from the Chinese word for food.

The only places in China to buy chows are Hong-Kong and Canton, for although they come from the interior, they do not penetrate to the fringe of civilization excepting through Canton, and they are brought there by the West River, which runs into the Pear River and eventually lands these semi-wild dogs in Canton, which is in itself probably the most uncivilized city of its size in the world.  So it is hardly strange that the average chow in China is not the sweet fireside companion that we find in European dogs: although given a proper chance there is no dog more affectionate ; and their strange, shy natures and wild instincts only make them more attractive 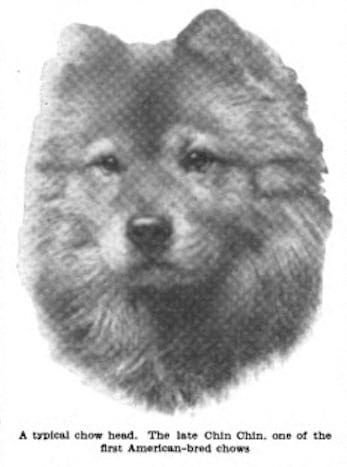 In China it is difficult to buy a full grown chow who is good tempered and in good condition, so, in choosing one to import, one is limited to puppies five or six weeks old; and this, added to the fact there is no sort of pedigree, makes the chance of buying a prize dog about equal to that of putting ones hand in a bag and picking out the winning number.  But that there is a winning number has been proved by the beautiful chows brought from China to Europe, who have taken prizes over their brothers in England, although the latter have had pedigrees brilliantly illuminated with championships for generations are certainly good representatives of their fine race.

In looking for chows in Hong-Kong, one must go to the bird shops that are to be found near the market, where they always have puppies for sale. They are all fascinating at that age, and, if one does not find many to choose from, it is only necessary to state what is wanted, and more fluffy balls will appear the next day, any of which can be bought for two Mexican dollars, which in China is equal to about one American dollar. 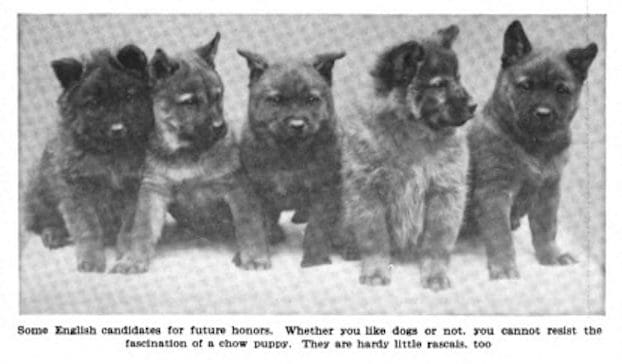 But as all the chows come from Canton, the best way is to visit this unique place, which every traveler must want to see aside from any interest in chows.  On arriving there it is a very simple matter to tell the guide that one wishes to buy a chow dog, and one word let fall seems to reach all the necessary quarters in a truly Eastern way; so that when a tourist has made the usual round of sights and shops, he finds himself at the market place, where two or three baskets full of chow puppies are waiting to be inspected, and among these he can usually find some very promising specimens.

The chances are that any day in Canton there would be some chow puppies for sale, but if a purchaser is expected there are sure to be more to choose from, and good ones being rare everywhere, it is better to announce ont’s visity to the market, on arriving in Canton. 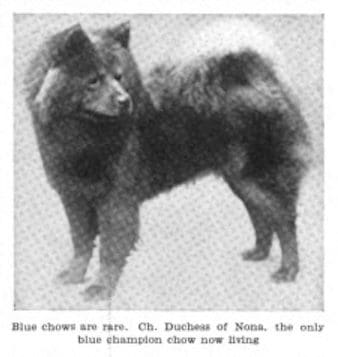 There is, however, one sort of chow that is almost impossible to find, even in China.  These are the blue, or as the Chinamen say, “gley” chows.   They seem to come under the unwritten law of all things really valued by the Chinese—such as old porcelain, fine Jade, and Pekingese spaniels– and are must difficult to buy.  Even fairly large sums of money fail to produce them, and when one asks for a blue chow the usual answer is “No can get”.  Although English people who have lived for many years in Hong-Kong say that the rich Mandarins often have blue chows, when a foreigner wants to buy one he is told they do not exist, or that it is impossible to get one, so he must content himself with what the Chinaman does not want, or go without.

It is very curious that anything as common as the red and black chows are in Canton should not be found in the northern parts of China, but this is doubtless owing to the fact that China has been, up to the present time, peculiarly divided, and the Chinese have taken no trouble to import dogs from one place to another . So the much prized Pekingese spaniels are only found in Peking, while the looked-down-on-chow remains purely a Canton dog.  Occasionally a chow is found on a ship in the northern ports, but one does not see them in the streets unless they belowg to foreigners who have brought them from Hong-Kong and Canton. 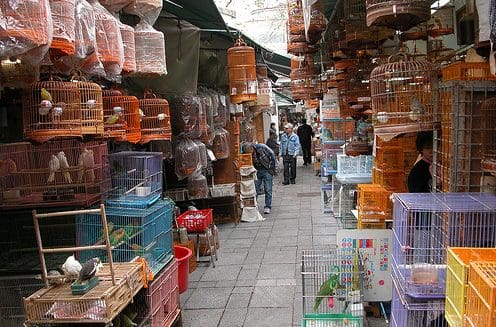 ABOVE: The Hong Kong bird market in modern times

It would be easy to write a great deal of the dogs in China, for there is, in the north,a dog called the “Wonk” that is not unlike a smooth haired chow. But these are simply pariah dogs and have ordinary pink tongues: they are really no more connected with the Chinese chow than the Manchu is with his brother from the south.

The important thing to remember is that to buy Chows in China one must go to Canton and Hong-Kong, as it would be easier to find them in London and New York than in either Shanghai or Peking: and another thing to be considered is how to get them home.  It is better if possible, to bring them oneself, as chows of any age are excellent travelers, with naturaally good manners, and if they are left to be sent home in the hold of a ship, where they are exposed to cold and drafts, the chances are that they will die of distemper before they ever reach their destination.    ~Annah Peck