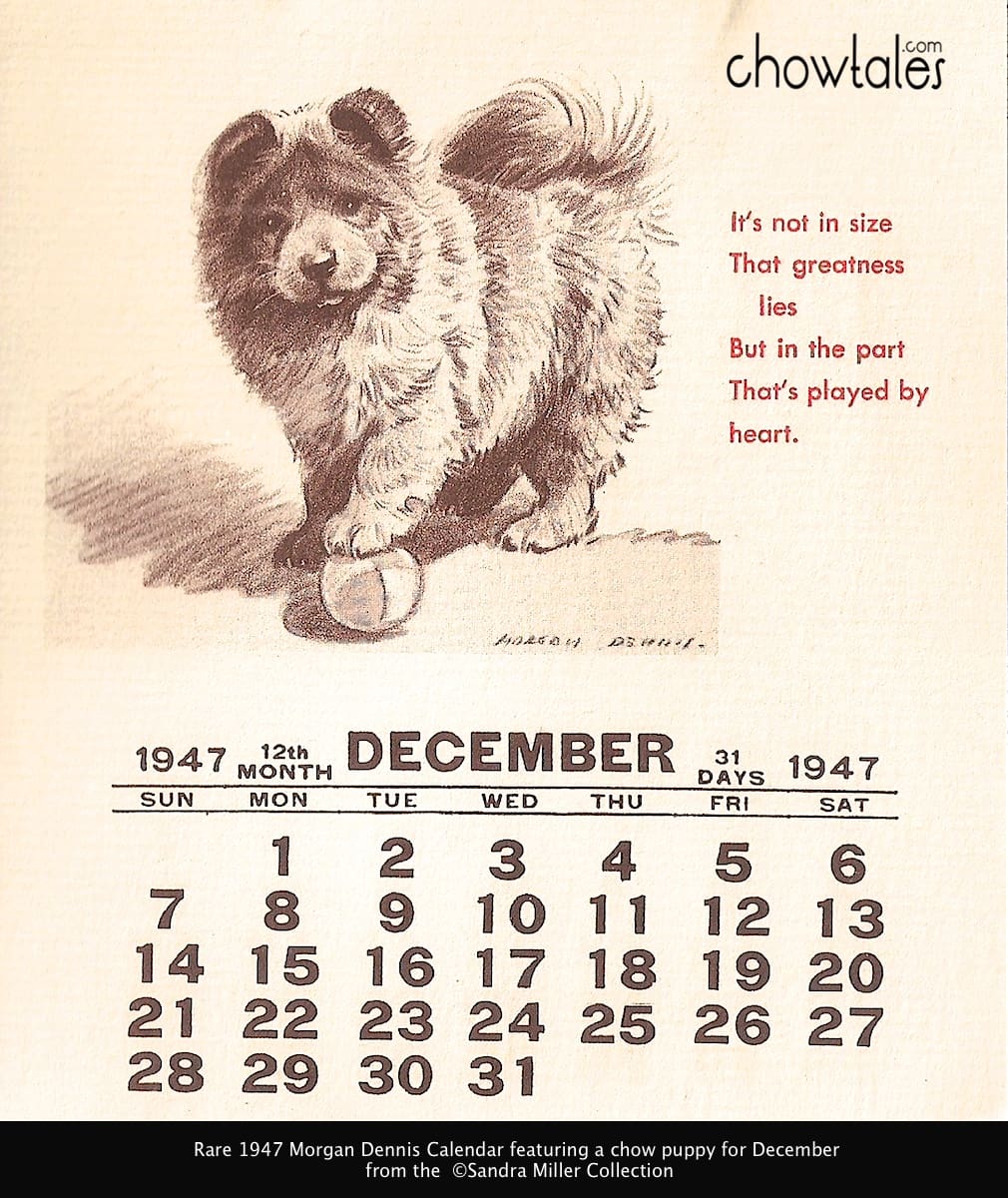 ABOVE is a very hard to find print which  was part of a special yearly series of calendars made for the American Humane Society.

What a treasure this calendar page in my collection is!!!!  I have not seen this anywhere else before (let me know if you have one too!!!) and in such pristine condition.  Morgan Dennis created so many memorable dog books and his illustrations full of life and character. Below find my collection of his chow etchings and artworks.

Morgan Dennis (b.1892-d.1960) was an American artist and writer who is most often remembered for his images of dogs. He was born in Boston and attended the American School of Design. He was author and illustrator of a number of books including: Pup Himself (1943), Dog Book (1946), Skit and Skat (1951), Pure Breeds (1953), and The Sea Dog (1958). His illustrations appeared in a number of magazines across the USA in the first half of the 20th century.

Morgan Dennis was involved in producing the poster for Be Kind to Animals Week® for several years in the early decades of the 20th century. In 1932, for example, he designed the following poster featuring a young boy kneeling down to offer a drink of water to his canine companion. Individuals and organizations could order copies of this 17×22 inch poster at a cost of 10 cents for a single copy, six for 50 cents, 16 for $1, 55 for $3 or 100 for $5. Space was left at the bottom of the poster so that local information could be added. Source 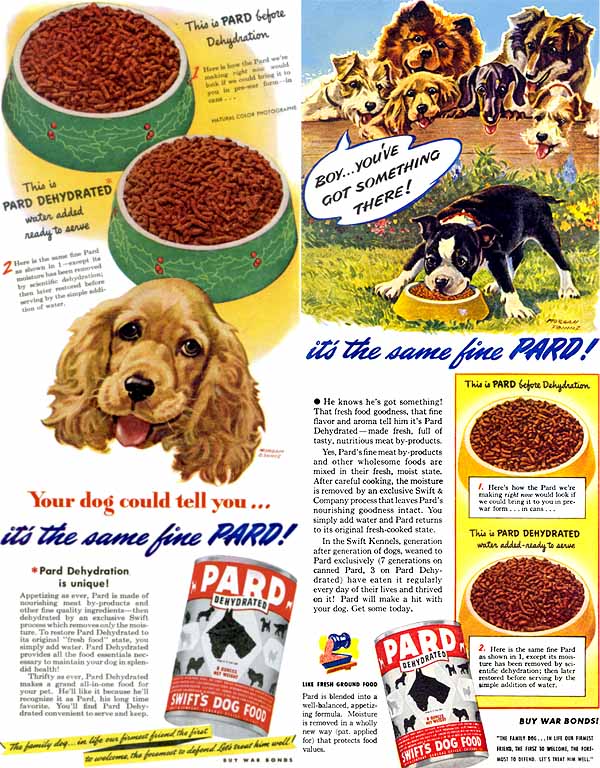 Morgan Dennis created this wonderful artwork for PARD dog food in 1944. See the closeup below of the chow!! 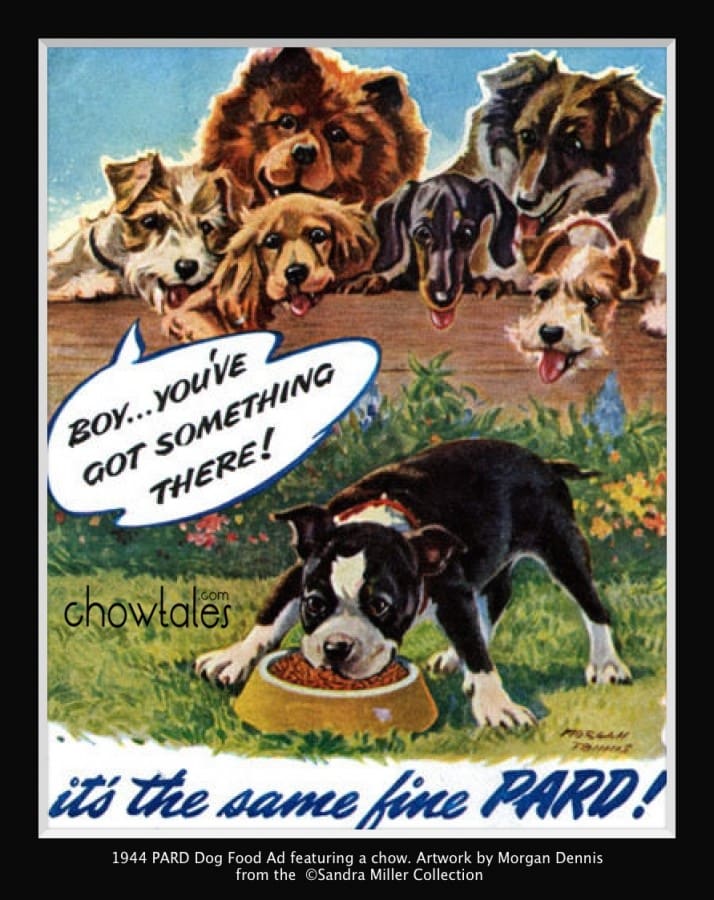 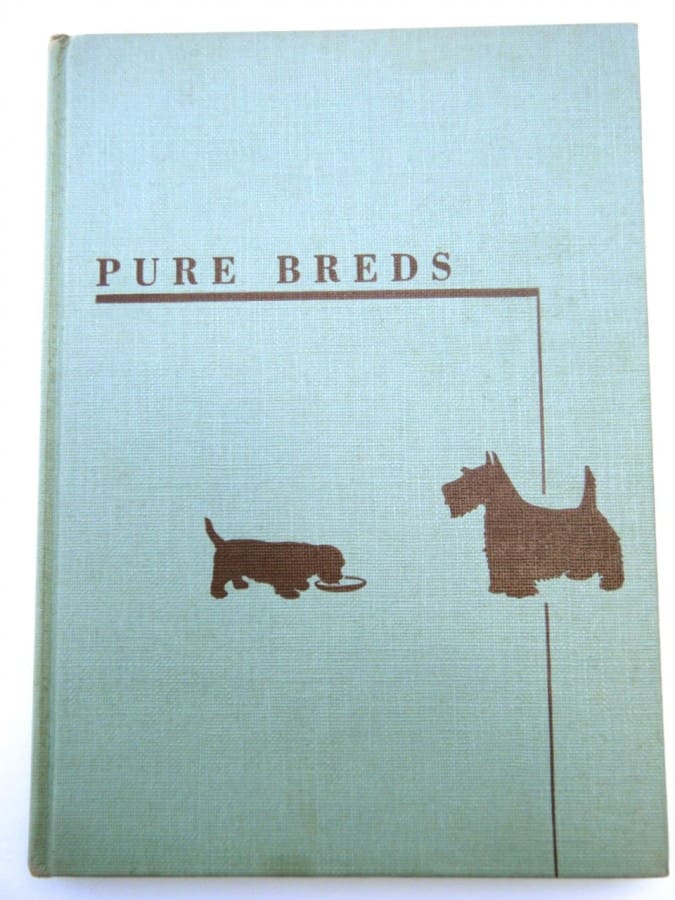 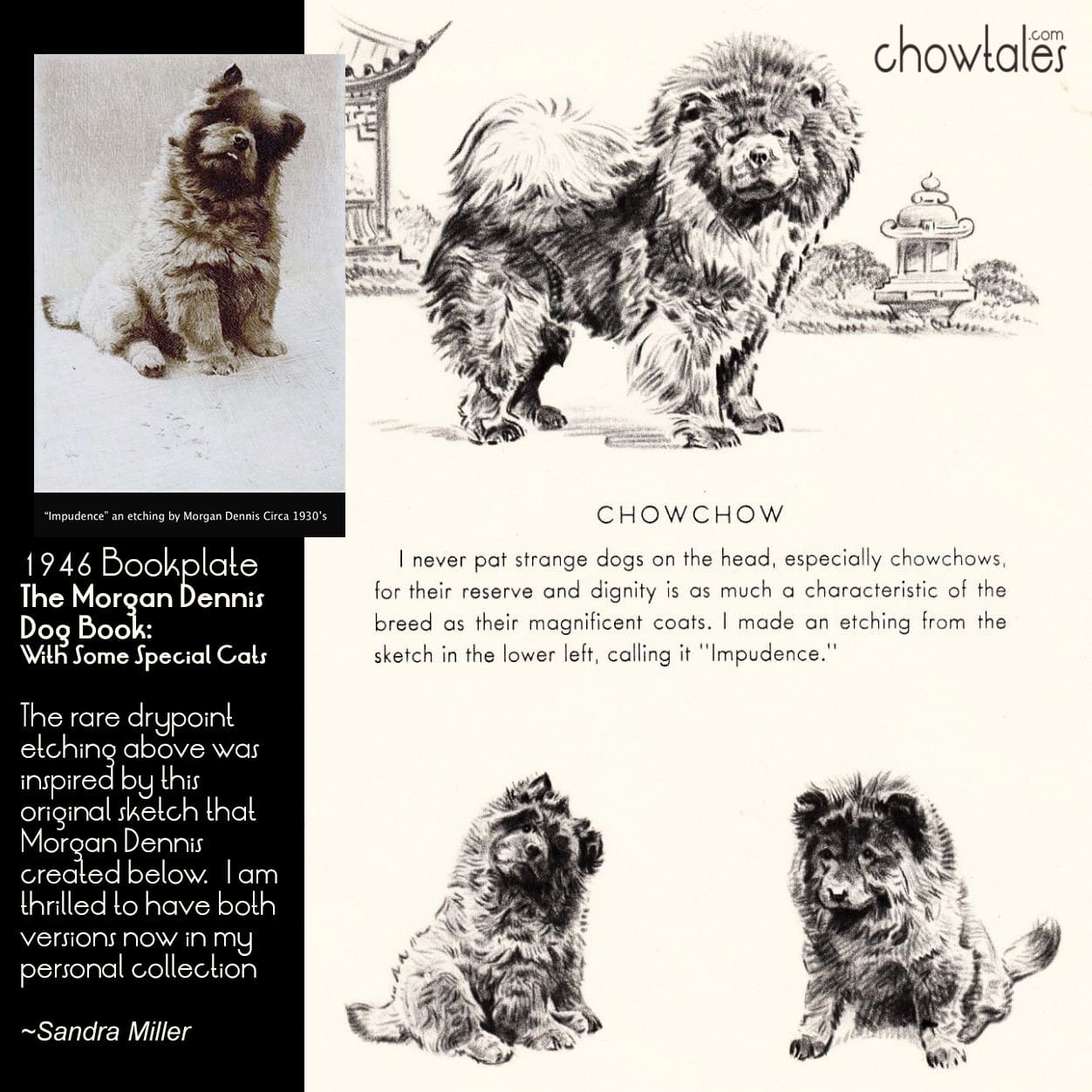 From the Foreword to the 1946 hardcover: “Animals have long had their champions to interpret their needs and build up sentiments to insure their protection from cruelty and neglect. Few, however, have been more effective in creating a kindly attitude toward animal life than Morgan Dennis. His dog and cat sketches are known throughout the world for their sympathetic understanding. By portraying their moods with touches of humor he has brought pleasure to countless thousands who have seen in them prototypes of their own pets. Fortunately, Mr. Dennis has the ability to add word pictures for his drawings that give them even greater charm.

The announcement of a new book of his sketches or his word whimsies is welcomed by cat and dog lovers everywhere. For years Morgan Dennis has been creating for the humane cause the widely distributed posters and calendars, and their influence has been pronounced. This new book will find ready favor among those who admire good art and have a soft place in their hearts for dogs. We hope that Mr. Dennis will continue to bring out new creations of his fertile imagination at frequent intervals.” (Sydney H. Coleman, President, The American Humane Association)

How blessed I feel to have finally obtained both of these rare,  original signed and numbered drypoint etchings .   They are very hard to find but the “chow” in me is stubborn and persistent. 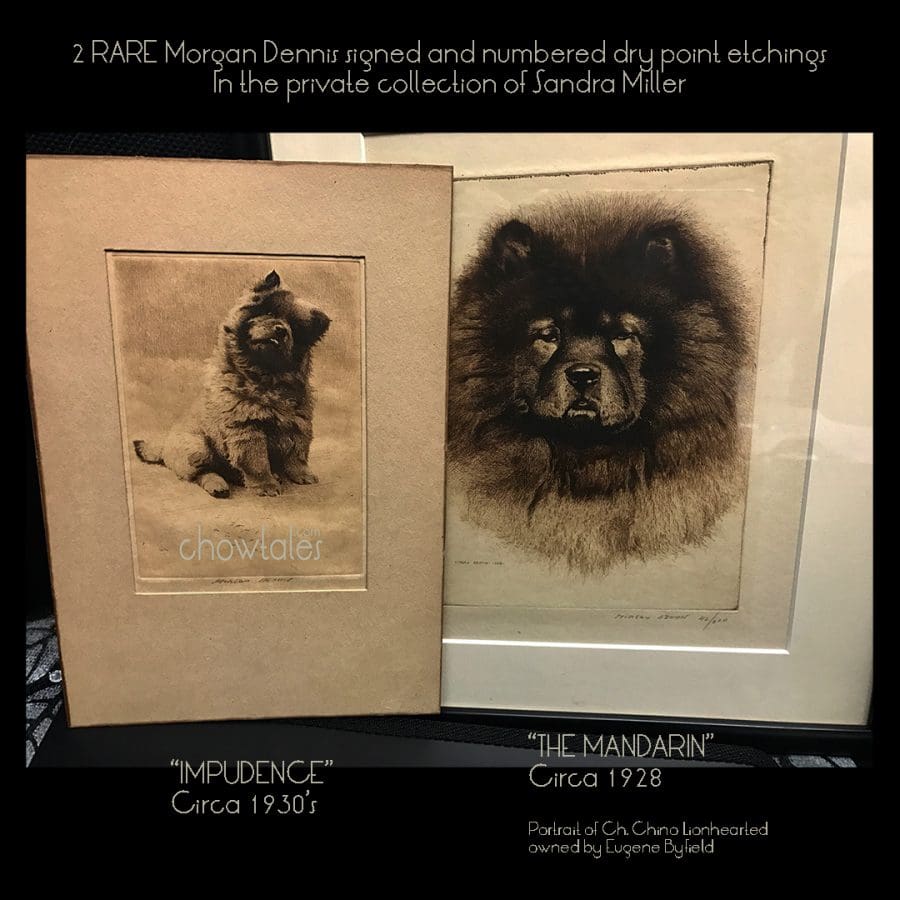 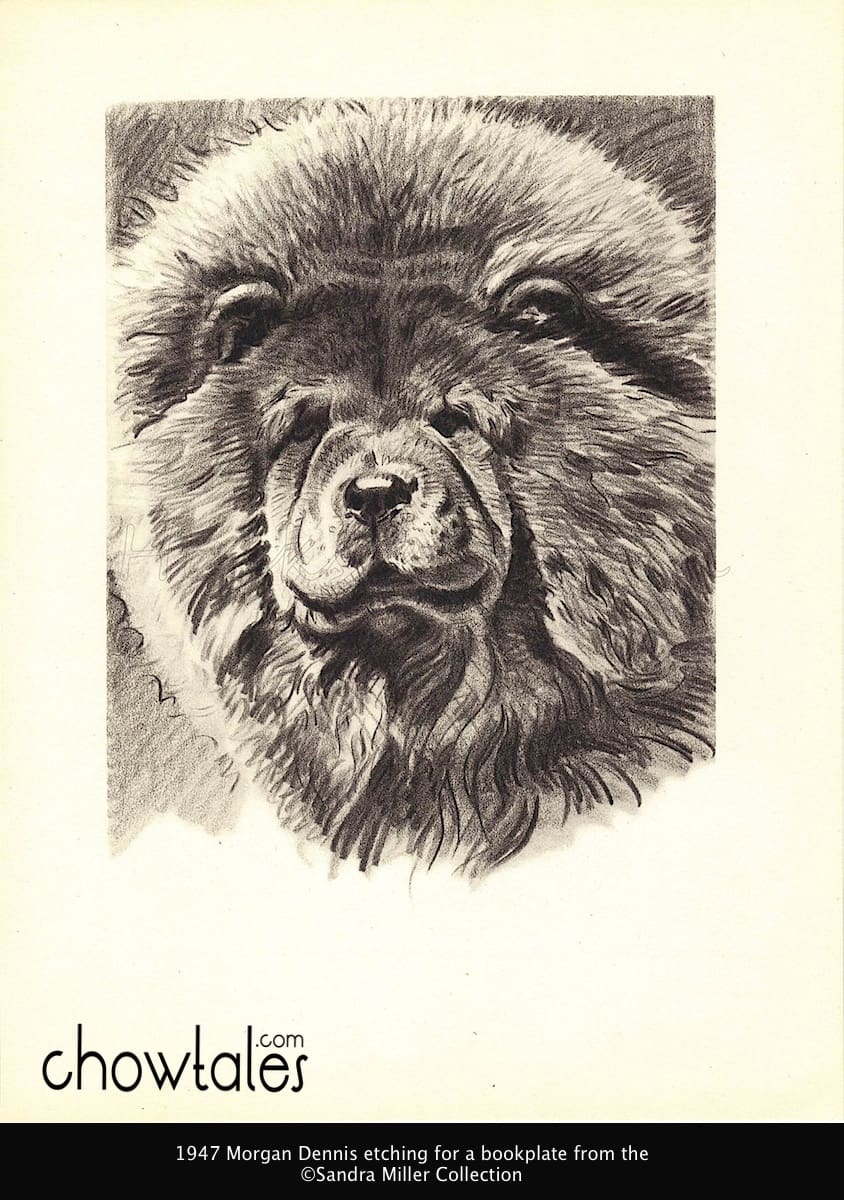