You are here: Home / CELEBRITY CHOWS / UPDATED – Circa 1915-1917 Eleanor Roosevelt – WWI Nurses and Soldiers pictured with a Chow plus magazine cover 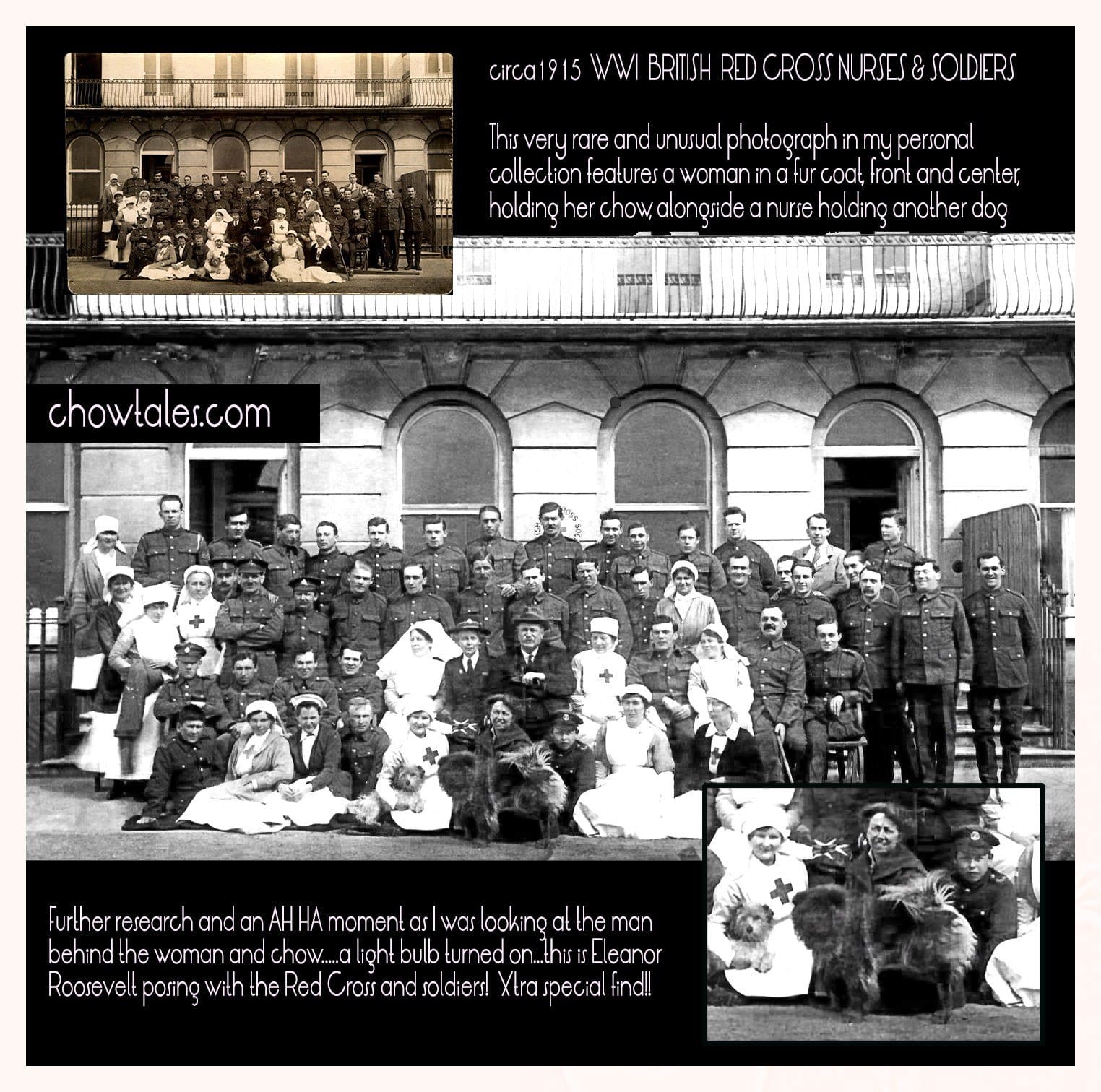 This is by far one of the most unique and amazing photos in my personal collection, I can’t begin to tell you how intriguing this is to me…..the story this tells just screams out for more research.   Eleanor Roosevelt is in the center of the photo with her Chow?   Was this a Red Cross aid or search dog….did the Roosevelts have a chow of their own.   Eleanor Roosevelt did a lot of work with the Red Cross during WWI,  so it comes as not surprise that this is her.   Many peoples pets were donated to the war cause.   I have first hand correspondence from the daughter of actor-director E.K Lincoln’s, that her father donated many of his celebrated GREENACRE CHOWS to the war effort.

Behind the soldiers on the wall is a sign which reads “BRITISH RED CROSS SOCIETY”,  so this was obviously taken in England. At least I have a country to start searching for answers.  The time frame was EXTREMELY early in the history of the Chow being introduced to  England and America, which makes this even a more mystifying scene to have such a rare breed in this image.  In England, as well as America there were a handful of breeders making a mark and importing from China including Lady Faudell Phillips and  Mrs Granville Gordon.

Today I  had another AH HAH moment that there may be a connection between this photo  above with Eleanor Roosevelt and this chow she is with.

Below, this beautiful magazine cover circa 1915 is from the same year as the photo above.  This well known magazine was called THE SKETCH and is from England.  This was a “supplement” to the magazine highlighting the Red Cross efforts during WWI.  How I would love to get a hold of an original copy of this issue for the ChowTales Archive and to read what is inside relating to this beautiful etching of a Red Cross nurse with a chow.  Was a chow used as a prop because of the magazine cover, or could it be that the artist was inspired by the chow with the nurses and the visit from Eleanor Roosevelt?  There may be no connection at all, or something very interesting.   Any leads on where I might find an original copy please contact this admin! 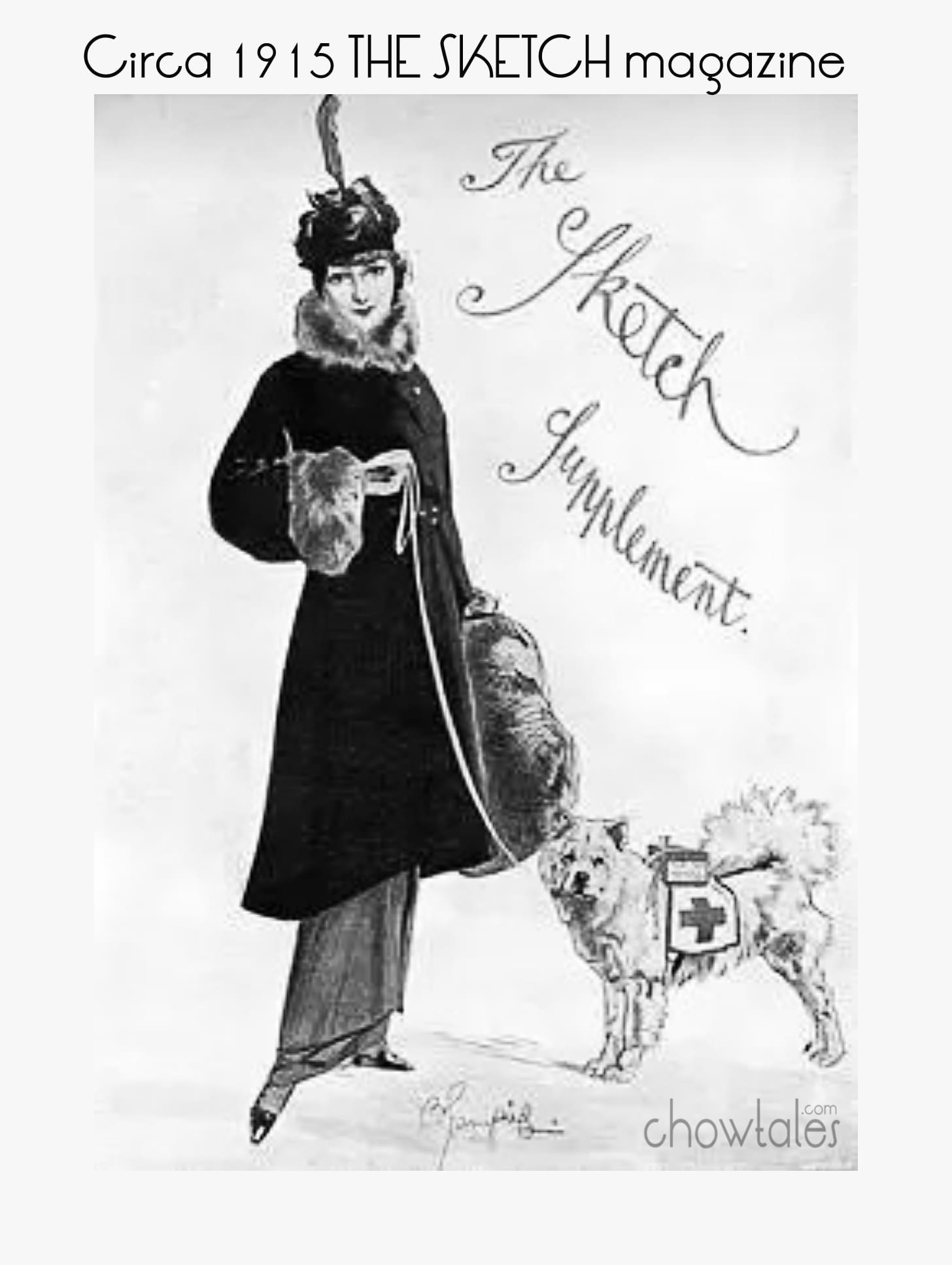 ALSO FROM THE SAME DECADE, THESE FOUR KEY  SIRES WERE  CONSIDERED AMERICA’S FOUNDATION FOR THE CHOW BREED  (ORIGINATING FROM  ENGLISH/CHINA LINES)

Enlarging and cropping out the man and woman from the large photo reveal that this is certainly  Eleanor Roosevelt .  The man behind her looks quite a bit like Grover Cleveland,      I’ll keep searching for more clues as to who the many and woman behind Eleanor are !!! 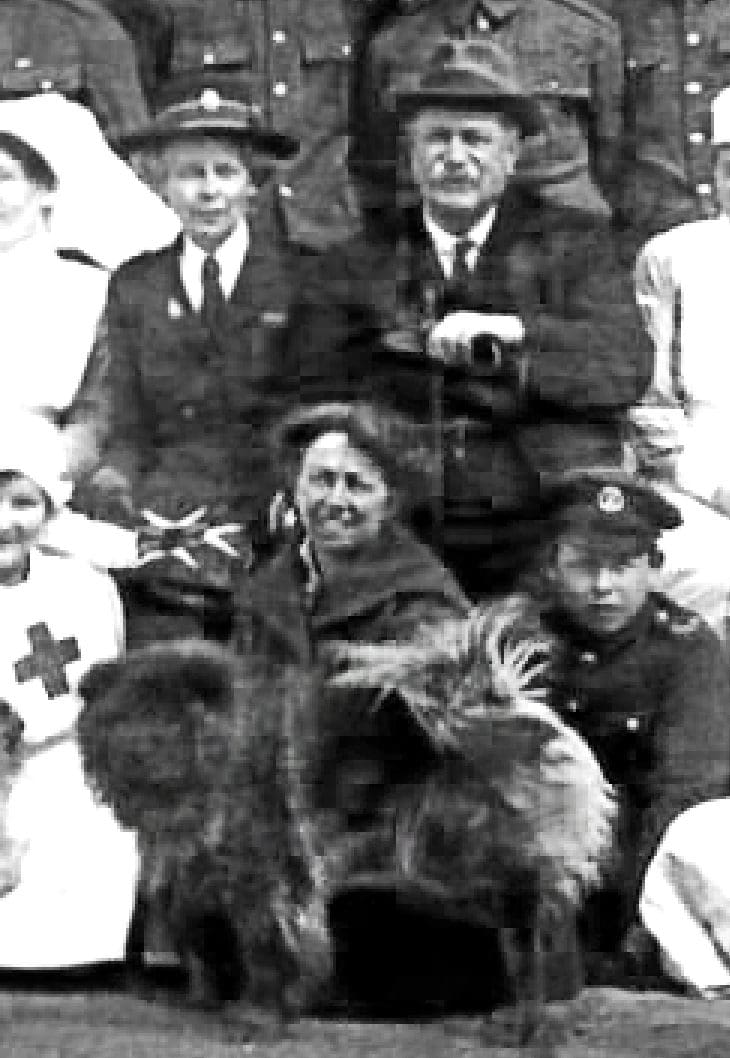