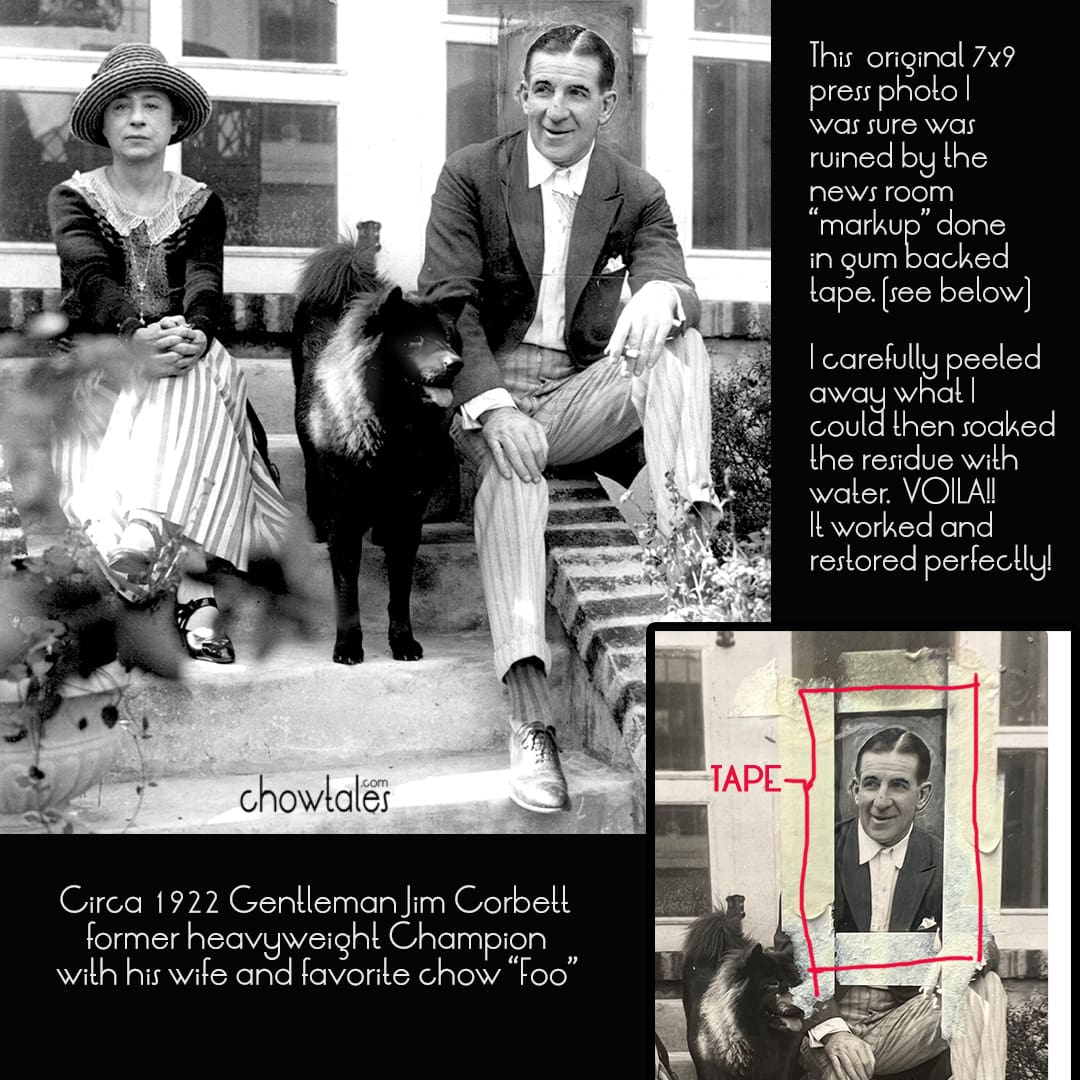 UPDATED:The above image is a new addition to the archives  added on November 19, 2021  (original post written in 2016).  This was the restoration I was certain I couldn’t pull off, but with patience and taking a HUGE risk on a 100 year old photo with WATER…..I was able to tease the gum backed tape off the surface of the photo.  Didn’t it figure the tape covered most of the chow’s face?  I was so happy to see a perfect image underneath once I let the paper completely dry.  I scanned it in and began restoring any scratches , tears and sharpening some details.  Its one of my favorite restorations showing this couple in a very high quality image and of course that the handsome chow “Foo”!!! 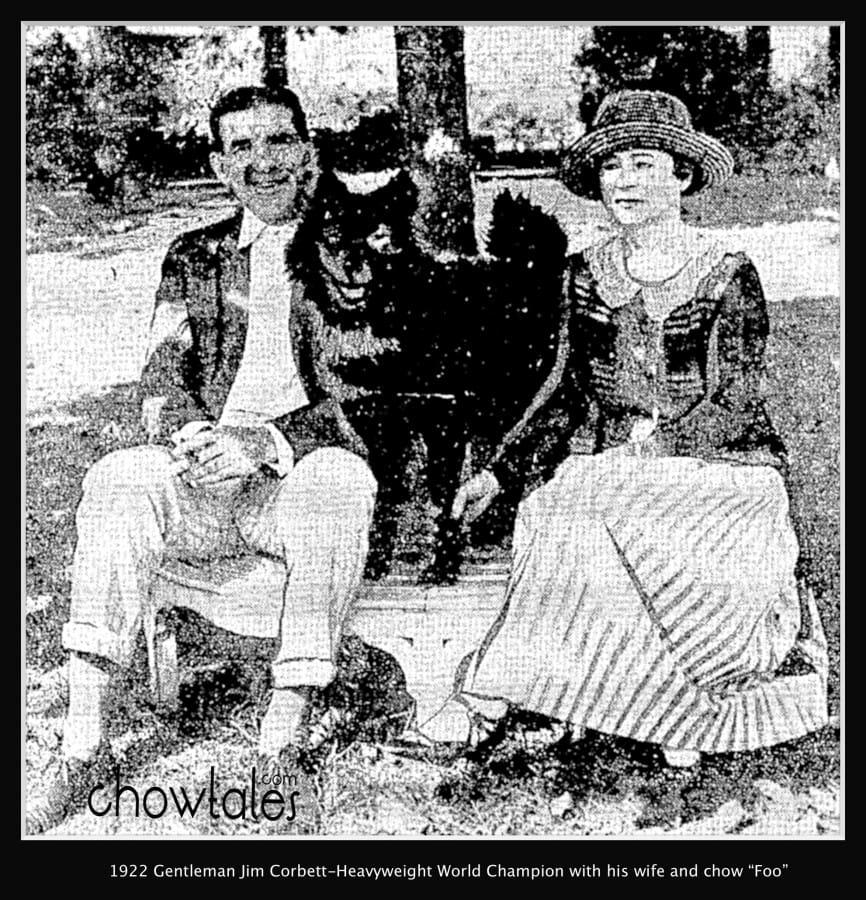 So many times when I am doing detective work on a certain chow or their person, I run into pleasant surprises that have little to do with the search….other than a chow being in common of course!  This find of Heavyweight Champion James (aka Gentleman Jim) Corbett and his chow “Foo”  was one of those bonus discoveries!  Below you can read a bit of his bio as well as another photo of Jim Corbett pictured with Foo.

James Corbett is pictured in Long Island at his home. Long Island being the hotbed of top chow breeders of the day so there is little doubt this dog was of rich and well bred blood

I did the best I could to bring out the image of the chow “Foo” but the original newsclipping was too damaged.  You can make out the dog faintly to the left of James Corbett.  I’m so glad I was able to find the first photo which is just beautiful of the entire family.

ABOVE IS A WONDERFUL DOCUMENTARY ON JAMES CORBETT
A A NEW BREED of boxer was born when James J. Corbett won the heavyweight title from John L. Sullivan in 1892. Corbett was an educated man who practiced the science of boxing. He broke the mold of the stereotypical brawling prizefighter.

Corbett was born on September 1, 1866 in San Francisco. He was raised in a middle class home, attended college and even worked as a bank clerk. He learned his boxing not on the streets but in sparring clubs. He learned how to box under the guidance of Walter Watson at San Francisco’s Olympic Club.

Because of his handsome appearance and classy ring style, he earned such nicknames as Handsome Jim, Pompadour Jim and finally, SOURCE Gentleman Jim. 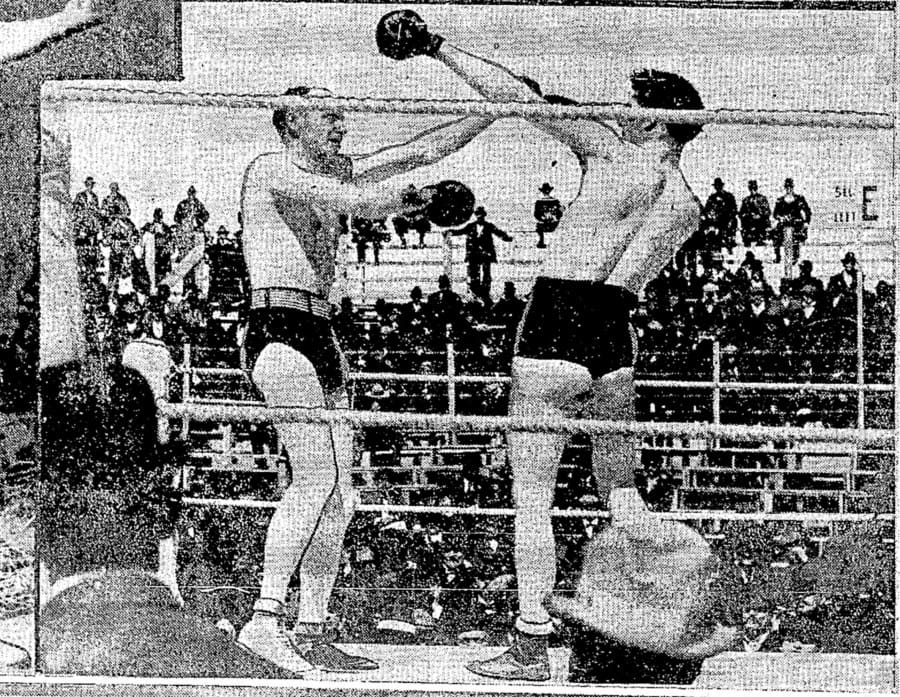 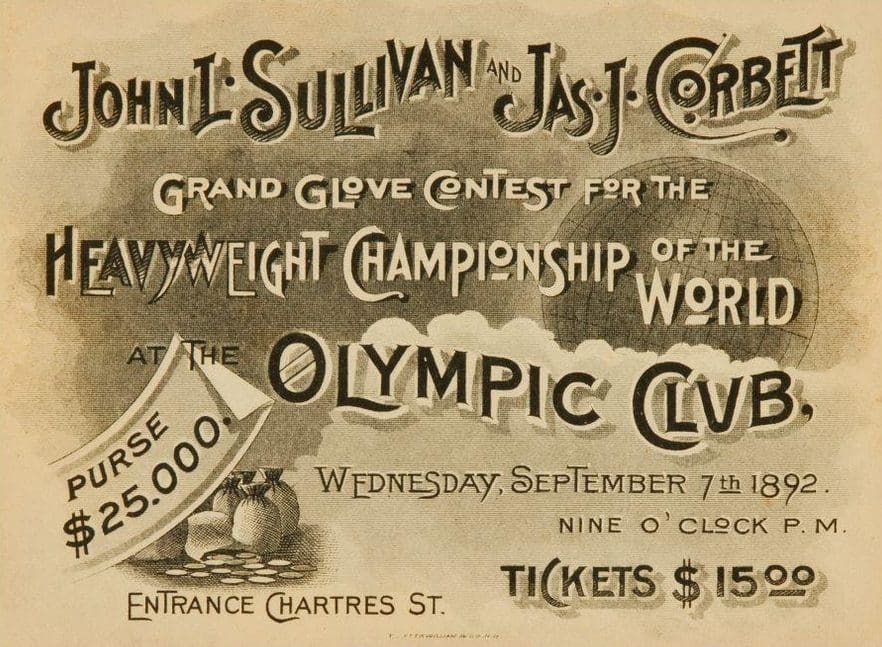