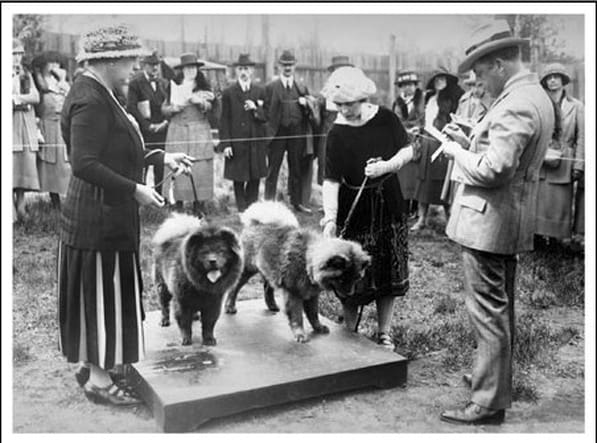 A peek into the past at the classic chows that graced the show ring during the Roaring Twenties when the breed was celebrated as a favorite of the rich, famous and high society.

This photo was taken shortly before the AKC Standard below became official.

HEAD – Large and massive, with broad, flat skull, well filled under the eyes, moderate stop, proudly carried, with characteristic scowl.
MUZZLE – Short in comparison to length of skull: broad from eyes to end of nose, and of great depth, The lips should be full and overhanging
TEETH – Strong and level
NOSE – Large, broad and black in color
TONGUE – A blue-black.  The inside of the mouth should be of the same color
EYES – Dark, deep-set and of moderate size, and almond shaped
EARS – Small, pointed stiffly carried.  They should be placed wide apart, on top of the skull, and set with a slight forward tilt.
BODY – Short, compact, well ribbed up, and let down i the flank.
NECK – Strong, full, set well on the shoulders.
SHOULDERS– Muscular, slightly sloping.
CHEST – Broad, deep and powerful
BACK – Short, straight and strong
LOINS – Broad, deep and powerful
TAIL – Tail set well up and carried closely to the back, following the line of spine at the start
FORELEGS – Perfectly straight, with heavy bone and upright pasterns
HINDLEGS – Straight hocked, muscular and heavy boned
FEET – Compact, round and catlike.
COAT – Abundant, dense, straight and outstanding: rather coarse in texture, with a soft wooly undercoat. In the smooth-coated variety, the topcoat should be of about one and a half inches in length.
COLOR – Any clear color, solid throughout, or, with lighter shadings on ruff, tail and breaching.
SIZE – Chows should be massive and well proportioned
GENERAL APPEARANCE – Lion-headed, scowling, compact, muscular, short-coupled, dignified, and powerful with heavy off-standing coat
DISQUALIFYING POINTS – Drop ears: tongue red, pink or obviously spotted.  Nose spotted or distinctly other color than black (except in blue colored Chows, which may have solid blue, or slate colored noses).

DOWNLOAD OR PRINT PDF OF THIS ARTICLE FOR RESEARCH